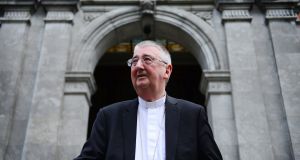 Archbishop Diarmuid Martin: said he hopes that “before next weekend, when Sunday Mass reopens, some flexibility will have emerged”. Photograph: Bryan O’Brien

Parishes should “manage scrupulously” the safety of people at Masses on Monday morning when churches reopen for the first time in over three months, Catholic Archbishop of Dublin Diarmuid Martin has said.

He described the lifting of restrictions on public worship as “a great moment in Church life” after “a difficult time”.

In a letter to priests in Dublin he said he hoped agreement could be reached with authorities to “permit removing the cap of 50” at Masses. There was “a recognition that the needs of the Catholic Church were different to those of smaller denominations where congregations were generally smaller”, he said.

He hoped that “before next weekend, when Sunday Mass reopens, some flexibility will have emerged”.

Last week, then taoiseach Leo Varadkar said the cabinet had agreed “an exception for places of worship”.

“However the specific protocol is going to be worked out with churches and religious bodies to allow more people to attend religious ceremonies. It will be very much policed by them,” he said.

Archbishop Martin said chief medical officer Dr Tony Holohan and public health authorities “were against making any exception for Churches from the maximum number of 50 at indoor gatherings”.

There were “specific concerns” about access to and exit from Churches and especially in car parks.

“They felt that the larger any gathering, the greater the risk; they referred to examples from overseas where outbreaks occurred around Church gatherings; they were concerned about the possibility of community singing fostering the spread of droplets,” he said.

It was felt the incoming Government “would follow the same path”, he said.

The Association of Catholic Priests (ACP) does not expect great numbers at daily Masses this week, with many smaller churches in Ireland remaining closed, said Fr John Collins of the ACP leadership team.

“We’re not going to have huge numbers. People are still dying with other countries bringing back restrictions,” he said. He believed it would be “well into July or August before a picture of the new normal is clear”.

Church of Ireland Archbishop of Dublin Michael Jackson thanked the authorities “for making the reopening of churches and other places of worship for public worship possible three weeks ahead of the expected timeframe”.

He called on people to “continue to contribute to the new sense of neighbourliness and kindness that has come to the fore in the darkest days of Covid-19”.

Mosques around Ireland will also reopen for worship on Monday morning with a maximum 50 allowed at Friday prayers in Dublin’s Clonskeagh mosque this week, said Dr Ali Selim of the Islamic Cultural Centre there.

Attendances will be much smaller at the majority of Ireland’s “almost 80 mosques, 21 in Dublin” due to social distancing, as these are less extensive, he said.

Following a recent Zoom meeting of the Irish Council of Imams “guidelines for the reopening of mosques were circulated in Ireland”, he said. These involve ‘9 Steps To Reopening Mosques Safely’ and also advise people to “consider a pre-booking system”.

A free ‘Hold My Space’ pre-booking App has been developed to allow people book places at religious services generally during the pandemic by Digital Ideas based in Bailieborough, Co Cavan. Director Fiachra McCloskey said it could also be used to book attendance at sporting and entertainment events.

A web-based App, it can be accessed at holdmyspace.ie and is free until July 20th next. He designed the App after being contacted by Fr John Bracken of his native Dundrum parish in Co Dublin whose website he had also designed.

Fr Bracken said he got the idea from “15-year-old Mount Merrion Junior Certificate student Kilian Plapp”. The App is already available on the Dundrum and Sandyford parish websites.