The company said they would ‘ensure that customers are protected, whatever it takes’ 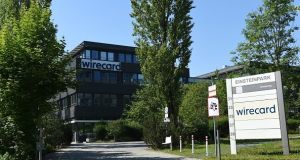 Events in Germany have led to Mastercards issued by Wirecard, which allow customers make purchases in 16 different currencies, to be effectively frozen. File photograph: Getty Images

An Post has moved to assure as many as 50,000 Irish customers who hold one of its prepaid foreign exchange Mastercards that they will be protected “whatever it takes” after the card issuer was ordered to halt operations.

Confusion about the status of the funds belonging to Irish consumers was in serious doubt for much of the weekend after German firm Wirecard was ordered to cease all regulated activities by the UK financial regulator.

The regulator there said Wirecard’s parent company was “currently the subject of law enforcement interest and insolvency proceedings.”

The company filed for insolvency after a €1.9bn accounting scandal emerged at the firm last Thursday.

“My card has approximately $900 on it. I cannot at present access these funds,” one customer told The Irish Times.

She said she had bought the card last year for a trip to the US “and planned to use the balance when I returned there this March but that trip was cancelled. “This is absolutely scandalous. How are we going to get our money back? My 21-year-old daughter was due to travel to San Diego on a J1 and put €4000 on the An Post currency card and now it is suspended,” another reader said. “Will she get the money back?”

In a statement issued on Friday evening An Post said it was “working to ascertain what impact this situation will have on customers.”

However in a fresh statement issued to The Irish Times on Sunday afternoon, a spokeswoman said the company would “ensure that customers are protected, whatever it takes”.

She pointed out that the An Post contract was “with Mastercard Payment Service (Wirecard is a Supplier to Mastercard). We’ve been working continuously since Friday to ensure resumption of service and unfreezing of customers’ cards. We partner with world class companies such as Mastercard because of their assurance and trust.”

She said An Post had been “in contact with Mastercard, our legal advisors and relevant regulatory and industry bodies to ensure a swift resumption of service and customer access to cash balances on their cards”.

The statement concluded with a promise of “a full update as soon as we have further information”.