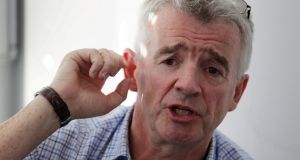 Ryanair boss Michael O’Leary has lost his status as a billionaire after his his net worth fell €167 million to a paltry €865 million, according to the latest edition of the Sunday Times Irish Rich List.

The reason for Michael O’Leary’s relatively precipitous decline is attributed to a fall in the Ryanair share price over the past 12 months.

There was considerably better news for the Limerick-born Collison brothers Patrick and John, whose fortune more than doubled to €5 billion thanks to the almost unstoppable march of their online payments company Stripe.

The two brothers are aged just 30 and 28 respectively, and the surge in their fortunes now ranks them second in the Irish wealth stakes, behind only the Weston retail giants.

All told – at least according to the list – Ireland has a record 17 billionaires with the overall wealth of the top 300 put at €87 billion, an increase of 10 per cent on last year. Anyone seeking to gain a foothold on the money ladder would need €57 million to get even a small mention.

Hilary, Alannah and Galen Weston jnr and family remain at the top on the rich list with a fortune of €11.932 billion. The Westons run a transatlantic retail empire from Europe to Canada which includes businesses such as Penneys, Brown Thomas, Selfridges and Fortnum & Mason.

The Collisons are in second on €5 billion, substantially ahead of Campbell Soup heir John Dorrance III, who is said to have €2.6 billion.

Meat processing kingpins Larry, Kitty, Laurence and Mark Goodman are said to have a combined wealth of €2.455 billion, while Dermot Desmond is in fifth place with €2.017 billion.

Lady Ballyedmond and family from Northern Ireland, the Dunne and Heffernan families, John Magnier and his family, and Deirdre, Mark and Aoife Lyons round out the top 10.

U2 top the list of richest entertainers in Ireland, with a combined wealth of €662 million.

That places them at No 3 on the list of performers in Ireland and the UK, with only Andrew Lloyd-Webber with an estimated €954 million, and Paul McCartney and his wife Nancy Shevell with €872 million, finishing higher on the money pile.

Michael Flatley is ninth on the entertainer list, with a fortune of €237 million.

Rory McIlroy was named as the richest young sports star in Britain and Ireland for the second consecutive year. The golfer, who is one of only two non-football players on the list of stars aged 30 or under, along with world heavyweight boxing champion Anthony Joshua, saw his wealth for 2019 increase to £138 million (€159.8 million).

The newspaper’s UK Rich List list puts the Hinduja brothers Sri and Gopi in the number one spot, with a fortune of £22 billion – more than £3 billion ahead of David and Simon Reuben.

In third place is Sir Jim Ratcliffe, head of petrochemicals firm Ineos, with a fortune of £18.15 billion.

Elsewhere in the rich list, Sir James Dyson reached his highest-ever position of fifth, with a fortune of £12.6 billion.