Michael Colgan to sue Village magazine for defamation of character 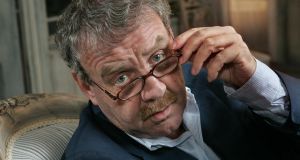 Michael Colgan, who allegedly bullied and sexually harassed employees while he was director of the Gate Theatre, is to sue Village magazine for defamation of character.

Since stepping down from the theatre in March 2017, Mr Colgan has faced a series of allegations from former employees and theatre workers that he touched them inappropriately, made inappropriate comments and humiliated them in and out of the workplace.

Following the publication of multiple accounts from Mr Colgan’s alleged victims, including those of seven former employees who spoke to The Irish Times, Village published an editorial on the matter.

Mr Colgan claims the editorial associated him with Hollywood producer Harvey Weinstein and actor Kevin Spacey, both of whom have been accused of sexual assault, and in Weinstein’s case, rape.

“Your outrageous article seeks to associate our client with and make him the subject of the serious criminal allegations that have been published in the media regarding Harvey Weinstein, Kevin Spacey and others with the clear defamatory inference that our client has been guilty of serious sexual crimes, including rape,” Mr Colgan’s solicitor told the publication in a letter sent on November 16th, 2017, six days after the article appeared.

The letter also states the article goes on to “infer” that Grace Dyas, who was the first person to publicly accuse Mr Colgan of misconduct, “was subjected to inappropriate sexual misconduct and bullying while an employee of our client and/or the Gate Theatre, which is not the case”.

Unlike most of Mr Colgan’s alleged victims, Ms Dyas was not a Gate employee but rather an independent theatre producer and director. On her blog last October she stated Mr Colgan had made inappropriate sexual remarks to her during a night out in Dublin.

“Not only are your references to our client totally unfounded but have clearly been published with a view to portraying our client as a serious sex offender and criminal,” the letter states.

In the November letter, Mr Colgan, who is represented by defamation solicitor Paul Tweed, demanded the magazine take down the article from its website and undertake not to republish it.

He also demanded a printed retraction and apology, compensation for reputation damage and reimbursement of his legal costs.

On Wednesday Mr Colgan’s solicitor lodged papers in the High Court stating its intention to bring a case against the magazine for defamation. The High Court typically deals with claims worth more than €70,000.

The case is being brought against Ormond Quay Publishing, trading as Village and the magazine’s editor Michael Smith.

Neither Village nor Mr Colgan responded to requests for comment.

The article was still live on the Village website as of Friday afternoon with a counter on the site stating it had been read 557 times.

The Gate Theatre has set up an inquiry, headed by Gaye Cunningham of the Workplace Relations Commission, to examine the allegations against Mr Colgan, who directed the theatre for 33 years.

This week a statement signed by 72 women working in theatre expressed “grave concerns” about the internal inquiry because some of the current Gate board members also served while Mr Colgan was on the board.