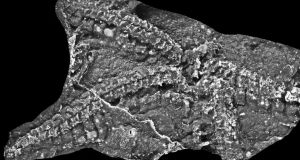 A 435-million-year-old fossil discovered in Connemara by an Irish geologist has been confirmed as a new species and the oldest of its type in Ireland.

The thumbnail-sized ophiuroid, or brittlestar, has also been named after the man who found it, Dr Eamon Doyle, in a rare honour for an Irish scientist.

The newly analysed brittlestar, a type of marine animal closely related to the starfish, is a species with super survival powers, Dr Doyle noted. Its relatives lived with little change through continents colliding, oceans opening and closing, and the extinction of the dinosaurs.

The specimen that he found in the Maam Valley scavenged for a living at a time when Ireland was farther south and split over two continents separated by the Iapetus Ocean, which predated the Atlantic.

It has been given the Latin name Crepidosoma doyleii by international palaeontologists in the latest issue of the Irish Journal of Earth Sciences, published by the Royal Irish Academy.

Dr Doyle, who is now a geologist with the Burren and Cliffs of Moher Unesco global geopark and Clare County Council, came across the fossil in Joyce country in Co Galway, in the late 1980s.

Dr Doyle told The Irish Times he was a young PhD student, soaking wet on a bicycle and looking for fossils between Maam Cross and Leenane, when he found a thin layer on a hillside. “I had an idea it was roughly 400 million years old, but starfish are very rare,” he said. “I forwarded it on and it was stored in the Natural History Museum, but these international researchers specialise in the evolution of communities and decided to examine it further.”

Prof David Harper, a palaeontologist at Durham University, who wrote co-author of the study with Daniel B Blake, a professor of paleobiology, and Prof Stephen K Donovan of the Naturalis Biodiversity Centre, in the Netherlands, said the remote areas of the west of Ireland continued to yield some “exceptional fossils” that contributed significantly to the understanding of the history of life.

“These unique specimens of fossil starfish from the Silurian rocks of Connemara are a key piece of evidence in the hunt for past life in the ocean that covered Ireland, some 435 million years ago,” he said. “We owe a great deal to the painstaking efforts of Dr Eamon Doyle.”

The specimen is due to return shortly from the United States to the National Museum of Ireland, where it will be put on display.

Dr Sarah Gatley of the Geological Survey of Ireland said Dr Doyle’s find in the “aspiring geopark” area of Joyce Country, in the Maam Valley, “highlights the need to protect our geological heritage and underlines why the GSI support the three Unesco geoparks as well as the aspiring geoparks in Ireland.”

3 Coombe begins investigation into vaccination of family members of staff