Overall winner of the BT Young Scientist and Technology Exhibition is Simon Meehan of Coláiste Choilm, Ballincollig, Co Cork. His work investigated the use of plants such as blackberries to fight potentially deadly bacteria. Video: Bryan O’Brien 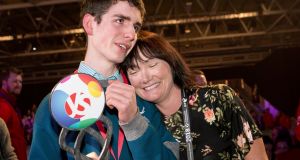 Simon Meehan and his science teacher, Karina Lyne. Much of the criticism for the winner came from people passing judgment on a piece of sound science that had hallmarks of brilliance, even though they had not read it

The court of social media put Ireland’s much-celebrated and internationally-renowned Young Scientist competition in the dock this week with accusations that it had become “unwinnable by any regular teenager”.

The exchanges were robust; but they were laced, too, with uninformed commentary as some tweeters disputed the originality of the work produced by this year’s winner, Simon Meehan (15).

Some schools are securing the use of equipment from third-level institutions to conduct experiments, while others were not in a position to do so, critics claimed, arguing that victory in the RDS now depends on external help.

Conveniently, they pointed the finger at Meehan, a student in Coláiste Choilm in Ballincollig, Co Cork, whose mother, Dr Brigid Lucey, is a Cork Institute of Technology microbiologist and whose grandfather, Eddie Lucey, is a well-known herbalist.

Much of the criticism came from people who felt in a position to pass judgment on a piece of sound science that had hallmarks of brilliance, even though they had not read it, filled with veiled suggestions that his family connections should have prevented him entering.

Equally, none of those who felt free to criticise Meehan had viewed an extensive outline of the help received that he had catalogued in his project logbook, and which was verified by those who provided it – something every BT Young Scientist entrant is required to provide to judges.

Scientists were quick to come to Meehan’s defence.

Prof Luke Drury, an astrophysicist at Dublin Institute of Advanced Studies and former president of the Royal Irish Academy, tweeted: “As a former winner [from 1969], can I just comment that the judging is similar to a PhD, a detailed viva voce examination by multiple judges.”

Dr John O’Donoghue of TCD’s school of chemistry added: “Congrats again Simon, as I’ve already said I’m delighted a lab Science project won this year! Particularly one with so much Chem involved. . .Science is about collaboration, not working in isolation!”

‘No room for waffle’

One exhibition visitor noted: “I discreetly eavesdropped on some judging (not this specific project) as I was curious as to the approach: they are warm, encouraging & thoroughly exacting. There is no room for waffle/recitation.”

BT Young Scientist & Technology Exhibition organisers, none the less, felt the need on Monday (as Simon was making a triumphant return to his school) to strongly defend the calibre of his research and to reject suggestions he benefited unfairly from external assistance.

In such circumstances it is timely to evaluate the contest in terms of the quality of project work, the way it is evaluated and what the event at Dublin’s RDS has become. It has changed dramatically over its 54 years. Most of the changes mark progress.

Today’s students are vastly more skilled at presenting their works with aplomb, performing in front of a microphone or a television camera with ease, and to think ambitiously. Many of today’s projects would rank ahead of undergraduate work conducted 40 years ago.

For those who say science is not about marketing, it is clear that the researchers of the future will have to be able to make the case for their endeavours and to counter the consequences of living in an age of “anti-science” and “fake news”.

The digital skills displayed by entrants to dig out information from the four corners of the world was striking. Equally, there is evidence of dogged persistence, sometimes over several years. All of it is the stuff of good science.

Such an approach was immediately apparent in Simon Meehan’s work. Having spent two years examining plants in his back garden for their “natural antibiotic” abilities, he extracted and identified non-toxic “anti-microbials” that could be used to treat to human infections; notably MRSA.

The effect was most pronounced in the leaves of a blackberry plant. “It was very obvious from the very start that Simon had done the work himself,” says biological and ecological sciences category judge, UCD head of microbiology Dr Tadhg Ó Cróinín.

Meehan’s research was not sent off to be done in a laboratory by others, he said. Instead, he used high-performance liquid chromatography in tandem with mass spectrometry equipment at UCC, having been shown how the equipment worked.

His work on bacteria was his, although he was not able to work directly on the infectious MRSA bug. What really impressed judges was his referencing of other literature, and his highlighting of differences with his results, said the UCD academic.

“There was a surprising amount of self-criticism and he does point out the limitations of his work. Something very interesting was his combining of two things – traditional herbalism and science,” Ó Cróinín adds.

The growing ties between universities and BT Young Scientists is “one of the great strengths of the competition”, said Ó Cróinín, adding that a majority of entrants have made connections outside their school. “We shouldn’t limit how far these kids can go.”

Every entrant can pick up the telephone to a university or college for help if he or she needs equipment, or help. Far from giving some an advantage, he believes links with third-levels mark a levelling of the playing pitch, not a tilting of it.

Judges challenge entrants, but also each other, he went on, adding that he had to restrain himself from replying to some on Twitter who had not spoken to Meehan, “who hadn’t seen his work and were making assumptions about the judging process”.

Exhibition founder Dr Tony Scott, who chaired the final judging session, says the process is “the most rigorous that you can devise”. A winner has to appear before 12 or 13 judges over up to five sessions. “Going for a PhD would not get that level of interrogation.”

The system has been copied by young scientist competitions around the world, and “has stood the test of time”. Throwing “curveball” questions can quickly catch out students who have not done their own research, Scott told The Irish Times.

Citing rule 1.24, Scott said students were required to display “absolute clarity” about external assistance and use of equipment, while the rules on plagiarism allowed judges to come down hard on it in whatever form it arose.

Scientists love to help entrants in the months running up to the BT Young Scientists every year, Scott stresses, to encourage the young to get involved in science; but only to those who are prepared to do the hard yards.

It is not unheard of for a judge on the night before final judging to check with colleagues throughout the world on the merits of a project or do an internet search to confirm originality. “It’s a great comfort to know that.”

During the final judging session to choose winners, Scott listened to the interaction of judges and quietly wrote down on a piece of paper who he thought would be the individual winner and what was the best group project. When there was “white smoke”, he was chuffed to see he got them right.

In the course of a bewildering number of media interviews before the awards ceremony, during it, and afterwards, Simon Meehan repeatedly thanked his grandfather; his mother, UCC and above all his science teacher Karina Lyne for assistance.

For Scott, “the support of parents and the encouragement of teachers” is the critical catalyst. “You encourage the students to talk to their teacher . . . The key person is the teacher – Simon had a fantastic teacher.”

In Scott’s own case his great teacher was the late Fr Tom Burke, who encouraged him to embrace science. They became colleagues in UCD’s physics department and went on to co-found the competition together.