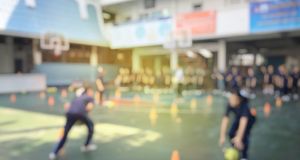 Due to Covid-19 regulations – which limit access to changing rooms – students are allowed to come to school wearing their training gear on the days that they have PE. Photograph: iStock

For many school principals who watched a social media storm envelop Carlow Presentation College over its school uniform policy, there is a trepidation that it could just as easily have been them.

“There is a constant, low-level worry that something will get distorted and blows up online; WhatsApp groups are the worst,” says one school principal, dealing with a similar uniform-related controversy at the school. “Someone gets the wrong end of the stick and it spreads like wildfire.”

Another principal who has also been in the eye of a recent controversy online agrees.

“It’s such a dangerous weapon. Individuals get named or attacked before any facts are established. But you can’t get into a row on social media . . . so, you keep your head down and hope it blows over.”

Schools are increasingly in social media’s crosshairs in rows over uniforms, discipline or treatment of pupils. Once, concerns would have been raised directly. Now, allegations spread before answers catch up.

In the stampede towards instant judgment, say principals, truth, context or nuance often gets elbowed aside.

In the case of Carlow Presentation College, it all started innocently.

Due to Covid-19 regulations – which limit access to changing rooms – students there are allowed to come to school wearing their training gear on the days that they have PE. Staff at the school had, however, grown concerned at the lapses in uniform policy, which stipulates that a tracksuit only should be worn for PE.

“What was being noticed by staff, myself and others, over the last month and a half or so is that on PE day when the students were coming in, particularly the girls, the uniform regulations weren’t being followed and it was becoming more of a fashion show more than anything else,” school principal Ray Murray told RTÉ.

Together with colleagues, Murray decided to issue a reminder to classes individually last Friday. Rumours – now known to be inaccurate – began to swirl among some students later that the decision had been taken due to discomfort among male members of staff. Some were unhappy that girls, not boys, had been singled out.

Murray said he checked with the relevant teachers to ensure nothing inappropriate was said. He said he was assured on multiple occasions that this was the case.

“We have female deans of discipline who are mothers themselves who are talking to girls and I know there was nothing inappropriate, wrong, or uncomfortable that was said to them,” he said.

What happened next, he says, bemused the school at first. Traffic on social media about the school began on Friday night, attracting more and more attention.

Later that night, an anonymous online petition was established to highlight “sexism against female students in school by the staff and students”. All of this was based on unsubstantiated, and, as it turns out, inaccurate reports.

When the mother of a student emailed the principal on Saturday, upset over what was alleged to have been said, the dean of discipline for the class responded to the mother via the principal.

“The mother rang me half an hour later to say, ‘I’m sorry for jumping the gun. I was going on what other people had told me’,” Murray said.

But the initial claims had gained even more online momentum, with 3,500 signates and a plethora of inaccurate allegations.

When some mainstream media began to run with the story on Tuesday, repeating the claim - again, one that was wrong - that the leggings were being banned because they distracted male teachers, the audience grew.

Many media outlets did not wait for the school to respond before reporting the allegations.

By now, in the full glare of national media, the school issued a short statement on Tuesday night. It stated that there has been no change in the school uniform policy – but it did little to counter the narrative.

With news dominating newspaper front pages and radio shows, Murray took to the national airwaves on Wednesday morning to set the record straight on what happened from the school’s point of view.

In the meantime, the original petition has reached almost 10,000 signatures, with no let-up in the original allegations. Faced with the controversy, the Department of Education has asked for a report.

For principals watching on, Carlow is a parable for our times. Four girls’ schools in Dublin alone are dealing with smaller-scale, but similar unfounded controversies, says one principal.

“The rage will die down and the story will move on, but it’s much harder for the principals and teachers who have worked so, so hard in the best interests of students,” says one principal.

“It’s risky responding publicly,” says another, “We don’t have PR advisers . . . If you’re defensive, you can be made to look foolish. If you get into a row, it looks bad. You can’t win a lot of the time.”