Men who drowned could not effectively indicate distress, investigation finds 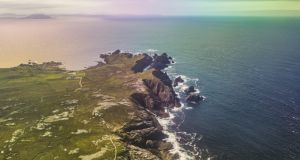 The men’s boat foundered near Malin Head, Co Donegal, after its engine cut out and waves washed over its stern. Photograph: Getty Images

Two men who died after their fishing boat capsized near Malin Head in July 2018 were in the water for five hours before emergency services arrived, “increasing the severity of the incident”, an investigation has found.

The report, compiled by the Marine Casualty Investigation Board, said the men did not have an “effective method of indicating distress” on board the vessel, and that the Coast Guard did not have sufficient information to begin an earlier search.

On July 17th, 2018, Thomas Weir (16), Gerry Doherty, in his 60s, and Dessie Keenan, departed from Portronan in Co Donegal on board a recreational powerboat at approximately 8am.

Around two hours later, the engine was started but it quickly stopped and it could not be started again.The crew anchored the vessel stern first while they attended to the engine.

While the emergency call was being put through by emergency call answering service to the coast guard, the mobile phone fell into the water and there was no further contact with the crew.

Two members of the crew, Mr Weir and Mr Doherty, died after the boat sank. The third member survived after receiving treatment in hospital.

The investigation into the incident found that the crew had “not planned the voyage sufficiently and were not prepared for this emergency”.

Its report also states that the the way in which the vessel was anchored made it “much more susceptible to swamping in any type of sea”.

The Marine Casualty Investigation Board said the crew did not have an “effective method” to alert the authorities to their distress, and that a mobile phone should not be relied on as the primary method of contacting the emergency services.

The coast guard said the information it received from the emergency call was “insufficient to task assets for a search”, as a result of the phone falling overboard.

Because the information in the recording of the emergency call was not transferred shortly after the call was logged, the casualties were in the water for five hours. This increased the severity of the incident, the report said.

In recommendations following the investigation, the board said the Minister for Transport should consider issuing a marine notice to draw attention to the Code of Practice, with particular reference to practice in emergencies.

“It is essential that the use of VHF radio as the primary means of contacting emergency services be impressed upon all boat owners and that VHF radios should be used in all instances, including in competitive sailing events,” it said.