First to go back into lockdown, Ireland has longest streak of falling infections in Europe 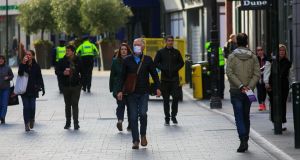 While the number of Covid-19 tests being done in the Republic has fallen, the percentage of positive tests has also dropped since late October, indicating that undetected cases are also falling. Photograph: Gareth Chaney/Collins

Ireland was the first country to go back into a national lockdown in Europe. However, there are signs that this has paid off, as the State has now clocked up the longest streak of decreasing infections of any European state.

The figures are collected by the EU’s European Centre for Disease Prevention and Control, which monitors data including infection rates, hospitalisations and deaths for the United Kingdom, the EU and the European Economic Area.

Starting in late October, the 14-day average infection rate per 100,000 people in Ireland began to drop. This was a turnaround from a long period from August in which the rate rose almost each week without a break.

Now, the Republic has the longest streak of weekly decreasing infections. While the number of tests has fallen, the percentage of positive tests has also dropped since late October, indicating that undetected cases are also falling.

The rate of deaths in Ireland has not yet begun to decrease, but is stable. Because people take time to develop symptoms and become ill, there is always a delay before intensive care admissions and deaths follow the infection rate.

As of Thursday night, when the ECDC data was last updated, Ireland’s infection rate was 138.9 cases per 100,000 people, with a testing positivity rate that has been dropping and was 4.3 per cent. This still puts the country firmly in the “red” category according to ECDC’s system of classification, but compares favourably to to trends seen in much of Europe.

To be classified as “green”, countries must have fewer than 25 cases per 100,000 and a test positivity rate below 4 per cent.

In addition, some countries have a very high percentages of tests coming back positive, which indicates the true size of the outbreak is greater than the tests are capturing. In Poland, more than one in three tests is positive, a level that Czechia, Bulgaria, and Slovenia are not far off. In Croatia, Romania, Hungary, Belgium, Austria, and France, between one in four and one in five tests are positive, which is also a dangerously high rate.

There are signs that the growth in infections has begun to level off in Czechia, Belgium and Slovenia. But in most countries in Europe outbreaks are still growing sharply, particularly in Austria, Croatia, France, Germany, Greece, Hungary, Italy, Latvia, Liechtenstein, Lithuania, Poland, Portugal and Sweden.

For comparison, the rate of infection is 471.8 per 100,000 people in the UK, and the percentage of tests coming back positive has been rising to reach 7.5 per cent. Northern Ireland has a higher rate of infections per 100,000 than the Republic according to UK figures, at 203.8 across the North and as high as 325.1 in the Causeway Coast and Glens area, but overall the rate has also been dropping.

Ireland is far from out of the woods however. The ECDC reported that the Republic was among the countries with concerning levels of infections among people aged over 65, as cases among the most vulnerable group in society are only at a slightly lower rate than the general population. There is also still pressure on intensive care facilities, as Ireland is still among the countries flagged for high ICU occupancy or rising admissions.

Across Europe, governments have put in place restrictions including curfews, moving education online, and closing bars and restaurants to try to curb a surge of infections that began as the summer period ended in September and saw total cases double from 5 million to break through the 10 million milestone in a matter of weeks. Since October 30th, France has once more been in total lockdown, with citizens required to carry a certificate to justify their reason for leaving the house.

Many countries are dealing with outbreaks that are much worse than the initial wave in the spring and health systems are strained across the continent, while the hard-hit countries of Italy, Belgium, Spain and France have seen deaths jump again to reach hundreds a day.