Mayo a winner as €2.8m jackpot sold in lucky store 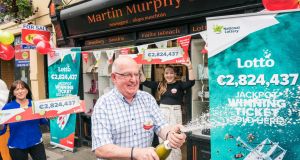 Mayo may not have got a cabinet minister in the new Government, but it does have Ireland’s latest lottery winner.

There was one winner of the €2,824,437 jackpot which was sold last week at Murphy’s newsagents on the Main Street in Ballinarobe.

This is the third Lotto jackpot winning ticket sold at the store, owned by Martin Murphy. The shop has served customers in Ballinrobe for more than 116 years.

On that occasion, Martin hit the headlines when he sold a winning ticket worth over €6.3 million to his brother-in-law Ger Murphy.

Martin Murphy said everybody in the town is “ecstatically excited” about the win and that someone among them is almost €3 million richer.

“You wouldn’t believe the excitement which is coursing through Ballinrobe town right now. It really is such a satisfying feeling knowing that we sold them the winning ticket,” he said.

In 2020, almost €73 million has been won in prizes in the Lotto game across Ireland, which includes 12 new millionaires which have been created in the Lotto and Lotto Plus games.