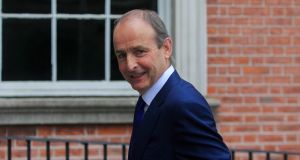 What is very important now is that we do not undo the good work to date, the Taoiseach Micheál Martin said afterwards. Photograph: Gareth Chaney/Collins

The Cabinet has decided to extend the current advice to the public to avoid all non essential travel until July 20th.

A “green list” of countries which people could possibly travel to will not be published until then. Countries with a similar level of Covid-19 disease to Ireland would be on that list and it will be regularly reviewed, Taoiseach Micheál Martin has said.

Non essential travel is not advised and should be avoided, he said. Mr Martin said countries that have the same disease status or similar to Ireland will be on the green list.

A significant discussion took place at the Cabinet meeting on Monday afternoon on the State’s ongoing response to Covid-19.

“What is very important now is that we do not undo the very good work undertaken to date. We don’t want to undermine the sacrifices that have been made to date by so many. That is why we are adopting a cautious approach to the international travel situation,” Mr Martin said, adding that second waves of the virus are emerging elsewhere across Europe.

He said the Government have two key objectives the first of which is to ensure that schools can reopen fully at the end of August. He said that there cannot be any undermining of the current position on Covid 19 that could interfere with that goal.

Secondly, non-Covid healthcare such as screening also needs to progress, he said.

Mr Martin also said the Department of Health will examine proposals for a testing regime at entry points to the State.

He said the current paper based passenger locator form being filled in by those arriving in the country will be replaced by an electronic system, capturing passenger contact data directly from the airlines and ferry operators.

“We need to significantly ramp up call back arrangements and this includes both follow up on the passenger locator information as well as symptom checking. The Department of Health will examine proposals for a regime of testing at points of entry into the country,” he said.

There will a heightened visibility of gardaí, public health officials and border management units at airports.

Minister for Health Stephen Donnelly said public health officials were very worried about the potential of a second surge of the virus being driven by an upswing in foreign travel.

Mr Donnelly said the Covid tracker app will be launched on Tuesday. “It will allow people who have the app to completely control their own data. There will be no centralisation of data. It will be a powerful tool.”

Minister for Foreign Affairs Simon Coveney said that while he understood the public did not want to hear that travel restrictions were being extended it was being done for a good reason.

“If you look at what is happening in other countries today they are in a targeted way re-introducing restrictions to try to suppress a second wave of spread of this virus. So what we are going to do is put a green list of countries together that we regard as being at a similar level of risk to Ireland.”

Mr Coveney said the Government plans to increase checks on those who fly into the country.

While there is no mandatory quarantine, it is mandatory for travellers to fill out the passenger locator form. Mr Coveney said checks will also now be carried out by an outsourced centre.

One week ago some 1,200 passengers arrived into Dublin Airport and on Sunday this rose to 4,000, he pointed out.

“We need to respond by ensuring that we understand where all those people are and that they understand their obligations in terms of what we are asking of them so that we maintain a collective public effort to stamp out this virus and keep it contained when it re-emerges.”

A “green list” of countries which people could travel to will be published closer to July 20. Countries with a similar level of Covid-19 disease to Ireland would be on that list and it will be regularly reviewed.

Mr Coveney said the criteria for entering the green-list will be threefold.

“The first is the number of new Covid 19 cases over the last 14 days per 100,000 inhabitants of whatever country is being assessed. The current figure in Ireland would be just under four which is very low. The second criteria is the trend in new cases in comparison to the previous 14 days. So we want to understand whether it is on the increase, or whether it is being suppressed.”

The third factor will be an assessment around the testing, surveillance and contact tracing arrangements in the given country, as well as the reliability of information “to make sure we are comparing like with like,” Mr Coveney said.

Furthermore there will be increased checks on those filling out the mandatory passenger locator forms.

“We are not happy that the follow-up today is getting as high a percentage as we would like in terms of follow-up phone calls,” Mr Coveney said. He said as footfall increases through airports the Government will seek to combine the personnel currently checking up on passengers with an outsourced call centre.

Travellers may also still be required to quarantine when they return to Ireland if that country is removed from the so called green list while they are still abroad.

“This pandemic is still accelerating globally. It is possible as we assess this on a fortnightly basis post July 20 that somebody could be abroad and have travelled to a country that was on a green list and all of a sudden the advice may change while they are away and it is taken off the green list. That means when they come home they would have to restrict their movement or self quarantine for 14 days. So there is a risk to travelling abroad because this virus is behaving in a way that is unpredictable.”

The Taoiseach said too that a range of Cabinet committees have now been established including a dedicated committee for the July jobs stimulus plan.

Mr Martin went on to say it was a “challenging weekend” in some places in terms of social distancing at and around pubs. “There was enough there to worry us,” he said but pointed out that the majority did comply with the regulations in place to prevent the spread of coronavirus.

He said the industry needed to be very focused now on adhering to the rules and all would be kept under review until July 20th. If this behaviour continued the reopening date would have to be reviewed, he indicated.