Martin acknowledges disappointment from many on missing out on minister jobs 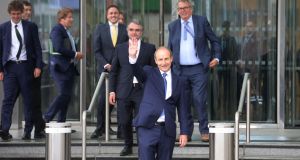 Taoiseach Micheál Martin has acknowledged many in Fianna Fáil were disappointed at missing out on ministerial appointments.

However, he said his hands were tied because there were only a limited number of places available to his party for him to share out.

“I knew in advance that the day I would be making those ministerial appointments that the honeymoon would end very quickly because simply there are not enough positions to allocate,” he said.

“I think the fact that Fianna Fáil were not in government for 10 years (meant) there was a lot of pent up desire and expectation from an individual and personal point of view that they would get ministerial office.

Mr Martin was responding to a question by host, PJ Coogan on The Opinion Line on Cork’s 96FM about comments made by Cork North West Fianna Fáil TD Michael Moynihan about his anger at being passed over for promotion.

Mr Moynihan accused Mr Martin of “disrespecting both him and his community” after being overlooked for a junior ministry, particularly in light of the fact he had “taken a lot of s**t” for Mr Martin over the years.

But Mr Martin was unapologetic on the show. He said he accepted that people like Mr Moynihan and others were angry, and didn’t make any secret of it but he had to look at a bigger picture.

“I would make the point we can’t take our focus off what the key issues are for the general public and the people out there, which is to continue to suppress Covid and I’m focused on that,” he said.

Mr Martin said his primary focus now was dealing with Covid-19, ensuring the schools could reopen fully and safely at the end of August, and managing the jobs stimulus programme, which is being unveiled later this month.

“To be honest, you can appreciate that I was kind of ushered in when I came down to the centre and it didn’t register with me on the day. On the day, Mary and the family couldn’t come up because of the Covid restrictions.”

Mr Martin said Mr Kelleher had acknowledged that he should not have attended the Dáil sitting in the Convention Centre and that he had since apologised for his actions.

“No, I didn’t know (Mr Kelleher was attending). I hadn’t thought the MEPs would be there at all because they had just started going back to Brussels because, as you know, they weren’t meeting either physically for some time.”

Q&A: What are the new Covid travel rules and how will they work? 21:57
Travellers ‘are treated like dirt’, Seanad is told by Senator 21:36
Tributes as Cork-born soprano Cara O’Sullivan dies aged 58 21:33
Former UDA member Michael Stone released from prison 21:13
Target to have all adults vaccinated by September ‘contingent on deliveries’ 20:58