Mass gatherings due to go ahead in Ireland amid coronavirus outbreak

Half a million people, many from overseas, due to attend Dublin St Patrick’s Day parade 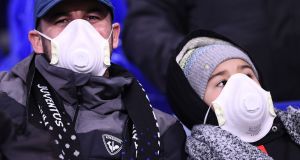 Juventus supporters wear protective face masks as a safety measure against the CoVid-19 novel coronavirus at the Parc Olympique Lyonnais stadium in Decines-Charpieu, France, on Wednesday, ahead of the Uefa Champions League football match against Lyon. Photogrtaph: Franck Fife/AFP/Getty

Ireland’s Six Nations rugby match against Italy has become the first casualty in Ireland of coronavirus after the IRFU confirmed the match in Dublin scheduled for March 7th is off amid concerns over the spread of the illness.

It could, however, be just the starting point of virus-related cancellations.

Halting mass gatherings, such as large conferences with participants from highly affected areas, “may be justified in exceptional circumstances” according to the European Centre for Disease Control – and many other events taking place in Ireland could fall be the wayside in the days ahead.

The next major event that could be at risk is the St Patrick’s Day Festival in Dublin. While no decision has been taken on whether or not it will go ahead as planned – and none is expected for the coming days – it is the largest mass gathering in Ireland this year.

Around half a million people, including a large number from overseas, are expected to attend the parade alone, while many thousands of other people are set to come to the country from all over the world during the period between Friday March 13th and Wednesday, March 18th.

St Patrick’s Day celebrations have been hit before. In 2001 they were delayed by two months after an outbreak of foot-and-mouth disease in Ireland and the UK.

Before the St Patrick’s Day celebrations there are a number of conferences due to take place, including the Talent Summit in the National Convention Centre in Dublin. Described as one of the largest HR and Leadership gatherings in Europe, it takes place on March 4th and the keynote speaker is to be Bob Geldof. About 700 people have registered to attend, with most from Ireland.

The organisers said they have had a small number of cancellations as some UK-based companies impose travel bans on their employees, but they remain optimistic it will be able to go ahead as planned.

Chief executive of the Convention Centre Dublin, Stephen Meehan, said events at the centre are currently continuing as normal.

He stressed that the health and safety of clients, visitors and staff was the priority. “We have hand sanitising stations at all entry and exit points, for both visitors and staff, and work with clients to facilitate any additional requests or measures they wish to put in place.”

He said the centre would “continue to monitor the situation and follow the advice of the HSE, the National Public Health Emergency Team (NPHET) and the WHO (World Health Organisation)”.

Among the events taking place in the RDS in the weeks ahead are a two-day “Place in the Sun” live property showcase in the middle of March, the Ideal Homes Show in April and a pregnancy and baby fair.

It said that while the HSE has said the current risk of getting coronavirus in Ireland is low, the RDS is “taking precautionary measures focusing in particular on good hygiene practices. Staff, exhibitors and visitors are being actively encouraged to adhere to these recommended hygiene practices.”

The 3Arena is among the venues where the largest numbers of people gather each week, and among the more popular shows and concerts happening there in the weeks ahead are sold-out gigs by Lewis Capaldi, the Script and Harry Styles. As it stands, all events at the venue are going ahead as planned.

It remains unclear whether Euro 2020 will be affected by the coronavirus, although it is the event which is likely to see the largest number of people moving across Europe this summer – with matches taking place in 12 countries, including Ireland and Italy.Four matches are set to be played in the Aviva Stadium.

“We are at the waiting stage. We are monitoring country by country, and football must follow the orders of the individual countries,” Italian Michele Uva, a member of the Uefa executive committee, told state broadcaster Rai. “The sporting path will only be closed if the situation gets worse.”