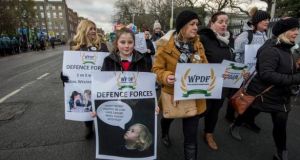 The group Wives and Partners of the Defence Forces marching to the Dáil last year in protest at low pay levels for military personnel. Photograph: Brenda Fitzsimons

A Defence Forces campaign group representative who withdrew from the general election contest to avoid splitting the vote for former Army Ranger Cathal Berry has secured a nomination to run for the Seanad.

Sarah Walshe, from Newbridge, Co Kildare, of the Wives and Partners of the Defence Forces Group, was nominated by the Irish Convention of Professional and Services Association, whose affiliates include the two Defence Forces representative groups Raco and PDForra.

She is one of a wide range of candidates for the five vocational panels to which 43 Senators are elected.

They include high-profile casualties of the general election, among them Fianna Fáil’s Fiona O’Loughlin, Timmy Dooley and Malcolm Byrne, who was first elected in the November byelection in Wexford. All three have formal party endorsement, as has former Donegal Fianna Fáil TD Niall Blaney, who lost his seat in 2011.

The party will name a number of other candidates when the final round of nominations closes next Monday, March 2nd.

Other candidates include relatives of former ministers, a son of late Phoenix magazine publisher John Mulcahy, and former Labour TD Dominic Hannigan, a director of Lough Mask distillery, who lost his seat in 2016.

Ms Walshe was to run in the general election in Kildare South, but withdrew when Dr Berry stood, successfully, in the same constituency.

Having worked in the health service, Ms Walshe said she was representing the vulnerable and the working poor, and added that it was not only Defence Forces personnel who faced poor pay and conditions.

The Seanad vocational panels electorate comprises the outgoing Seanad, incoming Dáil TDs and city and county councillors, a total of just under 1,200. Ms Walshe said she would approach mainly Independent and left-wing councillors.

Jack Mulcahy, son of late publisher John Mulcahy, is also contesting the election. A brother of former TD Michael Mulcahy, he is chairman of the Irish Art Review.

The Green Party has two candidates running on the university panels. Cllr Eva Dowling, who launched her campaign on Wednesday night, is running for the NUI panel as a science candidate, “to put science at the heart of policy-making”. The party’s candidate on the Trinity panel is Cllr William Priestley.

Laura Harmon, former president of USI and a leading member of the Together for Yes campaign in the marriage equality referendum, also launched her NUI campaign on Wednesday. Ms Harmon is a leadership co-ordinator for the National Women’s Council of Ireland.

Coronavirus: Assessment hubs to be set up around Ireland to deal with Covid-19 patients 10:21
Éamon Ó Cuív: There is concern within FF about government with FG 10:06
Man (27) arrested in Robbie Lawlor investigation released 08:43
Man dies after suspected stabbing in Co Tipperary apartment 07:58
Boy (5) dies in farm accident in Co Roscommon 07:41