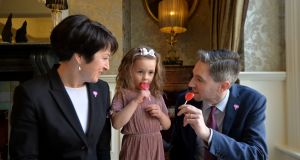 A unique collaboration between the health service and the charity sector has helped Ireland achieve a massive increase in survival from oesophageal cancer.

Despite the absence of any major new therapy or drug for this difficult-to-treat cancer, survival rates have increased from 30 per cent in 2000 to 50 per cent now. According to a recently-published Lancet study, this was the biggest improvement recorded in seven high-income countries.

This achievement is the result of the consolidation of cancer services and the centralisation of surgical care, according to Prof John Reynolds, national lead for oesophageal cancer, based at St James’s Hospital in Dublin.

But another factor, he says, has been the development of Ireland’s first registry for Barrett’s Oesophagus, on which 7,200 patients are now enrolled. The register, funded by the Oesophageal Cancer Fund’s annual Lollipop Day fundraiser, has ensured at-risk patients are diagnosed earlier, when their symptoms are treatable.

Barrett’s is a condition arising from severe or chronic acid reflux that may dispose a person to oesophageal cancer. Many of those on the register can be treated with radio frequency ablation therapy, administered via an endoscope, sometimes in association with minimally invasive surgery.

Despite these improvements, Ireland still has one of the highest rates of oesophageal cancer internationally, with 400 new cases a year, and a lot more work remains to be done, according to Minister for Health Simon Harris.

He was speaking on Wednesday ahead of the 19th annual Lollipop Day this Friday and Saturday to raise money for the OCF.

With no “magic bullet” available to treat the cancer, the only way to improve survival was to diagnose it early and improve treatment, according to Prof Reynolds.

“The OCF, through Lollipop Day and other fundraising, has had enormous impact in Ireland in oesophageal cancer. This connection with the public and patients creates an awareness of the condition, its symptoms and risk factors, as well as enables cancer prevention, early diagnosis, clinical trials and laboratory research,” he says.

OCF has contributed €1.8 million to fund oesophageal cancer research, including the Barrett’s register, over the past 20 years.

The charity says the public needs to be aware of symptoms of the cancer and the importance of early diagnosis. These can include difficulty swallowing food, persistent acid indigestion, heartburn or reflux.