Marian Finucane funeral: ‘The only thing I can give you are my tears’ 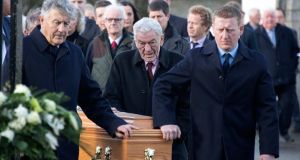 On the mass booklet, she was Marian Finucane Clarke, but to those who had known and loved her – in real life, or through the airwaves – she was simply Marian.

The Marian remembered at her funeral on Tuesday was an iconic broadcaster, a beloved friend and colleague, a familiar voice across the kitchens of Ireland, an activist, architect and – most of all – a beloved mother and “soul partner”.

She “made the colours brighter, the world a bit easier to live in”, said her husband, John Clarke, of “my Marian . . . the woman I have loved for 40 years”.

He told mourners that she had made plans to retire in December, before her sudden, shocking death on January 2nd, two months shy of her 70th birthday.

“We were so excited. We would have more time, more space, more books to read, more places to see. Sadly that’s not going to happen,” he said.

His voice was overcome with emotion as he said they were “two 15-year-old adolescents who were addicted to each other and who forgot to grow up”.

The chief celebrant was her first cousin, Msgr Ciaran O’Carroll, who spoke about the loss to the nation, and most of all, to her family, John, her son Jack and daughter-in-law Jennifer, while also remembering her late daughter, Sinead.

Jenny and I will try to raise our child to have courage, curiosity and kindness – all virtues that Marian espoused

“The influence of Marian was significant. The contribution she made to advancing and shaping our nation and its people through her professional work as a courageous broadcaster, and her determination to facilitate conversation without fear or favour, was repeatedly and wonderfully captured in countless public tributes,” said Msgr O’Carroll in his homily.

He spoke about her “great empathy and sense of fairness”. She was, he said, a “generous and determined woman, and a thoughtful and kind friend”.

The impact Finucane had on public life in Ireland was celebrated, but it was the picture of the private Marian which moved mourners in St Brigid’s Church in Kill on Tuesday.

In his eulogy, her 32-year-old son, Jack, remembered “the many different versions of her there are: the mother, the wife, the sister, the aunt, the stepmother, the mother-in-law, the friend, the colleague, the journalist, the radio host, the social commentator, the activist and the architect.”

All these selves were very genuine, but to him she was always “Mam”, “a shy lady who was as happy reading a book in silence as she was sitting around the dinner table in the small hours of the morning with friends, laughing, joking . . . generally sorting out the world’s problems, one dinner party at a time.”

She was someone who liked nothing more than “being in bed during a storm, listening to the wind and rain crashing against the windows, with the duvet pulled up to her chin. A classy lady with soul, in the truest sense.”

I find myself so powerless at the moment. I truly don’t know what to do

One of her favourite songs was Revolution by The Beatles. “She taught me that if you want a revolution, you can start one, by challenging people, by finding commonalities, and by finding within people their capacity to improve.”

He pledged that her spirit would live on when the next generation of her family is born next month. “Jenny and I will try to raise our child to have courage, curiosity and kindness – all virtues that Marian espoused.”

His steady delivery faltered only twice: once as he remembered how she’d say, “Stand up straight. Look them in the eye. And go from there.” And again as he wrapped up with the words: “Thank you Mam. We love you, and we miss you terribly.”

Joining him on the pulpit, his father, John Clarke, paused for a moment, his forehead resting in his hand, as he struggled to find the words to encapsulate his grief on this “hard day, terrible week. I find myself so powerless at the moment. I truly don’t know what to do.”

He recalled a woman they met in an African township recently, who said: “‘The only thing I can give you are my tears.’ And that’s all I think I can do today,” he said, overcome with emotion, to sustained applause in the church.

In the churchyard afterwards, Miriam O’Callaghan described how her colleague “hated all the celebrity element attached to being a broadcaster. I found that really touching in her. She was just a brilliant journalist.”

She had not known Marian planned to retire. “It was a shock to all of us. They were planning the next 20 years of just going around and having fun together, enjoying life, reading, and it has just been taken away. Life is but a blink.”

In Finucane, Gay Byrne and, most recently, Larry Gogan, ‘we have lost three beautiful, iconic broadcasters’

Mourners had begun arriving at the Kill chapel two hours early, beneath heavy grey skies and an unforgiving wind. RTÉ staff members described their disbelief to find themselves attending the funeral of another beloved colleague, while still reeling from the news of the death of Larry Gogan. Huddling in the churchyard, they spoke about epic dinners at the Finucane Clarke home, and how they had never heard her raise a voice in anger at work.

Ryan Tubridy said it was a “very, very sad day for us in RTÉ”. In Finucane, Gay Byrne and, most recently, Larry Gogan, “we have lost three beautiful, iconic broadcasters, who are not just people in a studio taking into microphones.

Shortly before 2pm, as the funeral cortege drove away, mourners lining the street broke into a spontaneous round of applause.

“It was like as if she was one of my friends,” said Mary Conlon, from Kilnamanagh in south Dublin, who listened to Marian every Saturday. “I will miss her.”