Man (20) arrested over attempted abduction of woman in Dublin 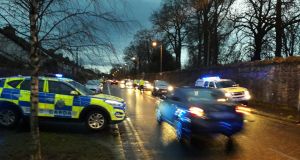 Gardaí have been conducting checkpoints in Dublin 7 where the attempted abduction of a woman in her 60s occurred.

Gardaí have arrested a 20-year-old man in relation to the attempted abduction of a woman in Dublin on Monday.

The arrested man is from the west of the city and while he is known to gardaí his pattern of known offending to date has been relatively minor.

He had been wanted for questioning in connection with a number of petrol station “drive-offs”, during which a driver filled their car with fuel and drove away without paying.

Gardaí are satisfied that the suspect had no connection whatever to the woman, in her 60s, who managed to fight off a man who tried to abduct her on Monday morning.

Instead detectives believe the attempted abduction was “completely random”. It has also emerged the woman who was attacked would normally take another route through a park on her morning walk but decided against it on safety grounds on Monday morning.

She believed she would be safer walking along the pavement on Blackhorse Avenue, Dublin 7, but came upon a man standing beside a parked car, the boot of which was open.

The man initially tried to bundle her into the boot of the car but the woman fought back and used her arms and legs to prevent the boot from locking after she had been pushed inside it. Her attacker then tried to push her onto the back seat of the car but a passing motorist stopped and approached and the man sped off.

Gardaí were very concerned as the attack appeared to be random and caused significant fear in the area.

However, from the description of the suspect’s vehicle relayed to gardaí by the victim and witnesses, detectives quickly established the car had been linked to the recent petrol station drive-offs.

Using that information, a man was arrested and a car seized for examination in connection with the drive-offs. Further investigations by gardaí overnight into Tuesday established the same vehicle was in the area of Monday’s attack when it took place - at about 7.30am along Blackhorse Avenue outside St Martin’s Grove Estate.

Once the vehicle was placed at Monday’s crime scene around the time of the attack, the suspect in custody for the petrol station drive-offs was arrested on suspicion of abduction.

The man was on Tuesday evening being questioned in Blanchardstown Garda station on suspicion of false imprisonment. He can be questioned for up to 24 hours before being released or charged. His car was being forensically examined by gardaí.

Locals have said the incident has left them “looking over their shoulders” since. “The most worrying thing is nobody seems to know why this happened or if it will happen again,” said a resident of Blackhorse Avenue, who asked not to be named.

Shortly after the incident, gardaí launched a large-scale investigation and put out an appeal for a man wearing a white t-shirt and dark trousers who was driving a silver family saloon.

On Tuesday morning, gardaí set up a series of “information gathering” checkpoints near the site of the incident. Motorists were asked if they travel the route regularly and if they had noticed anything out of the ordinary the previous morning.

Investigators still wish to speak to anyone who was in the vicinity of Blackhorse Avenue between 6am and 8am on Monday, or anyone who may have information about this incident.

They are also appealing to road users who may have camera footage. Anyone with information is asked to contact Blanchardstown Garda station on 01-666 7000, the Garda Confidential Line on 1800-666111 or any Garda station.

“People are just shocked and upset and worried. Both for the woman herself and everything behind it, said Ms Fitzgerald. “They are doing their best both to support the woman and help the gardaí by providing any information.

“At that hour of the morning there wasn’t a lot of people around so information is scarce. It’s really worrying and really upsetting.”

She said the seemingly premeditated nature of the incident is causing “real concern” for locals.

“People are just being vigilant and just looking out for each other.”

Local councillor Neasa Hourigan said it appears to have been a “completely random” attack which has left locals looking over their shoulders. “I’ve never come across anything like it,” the Green Party councillor said.

“There seems to be a level of violence and aggression and it would be unusual in our area. People are uneasy about it and don’t quite understand what happened. I think everyone is feeling they are a little more on their guard.”