Number of patients on trolleys remains at 760 on Tuesday 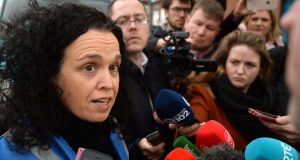 For the second day in a row there are 760 patients deemed to require admission to hospital waiting on trolleys in emergency departments and on wards for a bed, nurses have said.

This equals the record level of overcrowding experienced in hospitals on Monday.

The INMO said it had written to Minister for Health Simon Harris seeking:

The nurses’ trade union said it also wanted funding that had been previously agreed for the Safe Staffing Framework to bring numbers to safe levels to help ease overcrowding and improve patient outcomes.

“Otherwise, the risks to patient safety will continue throughout 2020,” said the INMO.

She said 760 patients on trolleys meant the health service was simply not functioning.

“The longer this level of overcrowding continues, the greater the threats to patient safety. We have written to the Minister calling for action. We need to grasp the nettle and declare a major incident, cancel electives and immediately approve recruitment for the worst-hit hospitals.”

The hospital said it would review this decision on Thursday with regard to elective surgery scheduled for next week. It said all patients who had procedures cancelled would “be facilitated with a new appointment as soon as possible”.

“The hospital has worked tirelessly with our colleagues in the community over the holidays to ensure all hospital and community beds were utilised. But the surge in influenza presentations to the Emergency Department now mean that exceptional measures have had to be taken in the interests of patient and staff safety.”

This move was criticised strongly by hospital consultants who said it would have severe knock-on consequences for patient-health outcomes.

The Irish Hospital Consultants Association (IHCA) said all non-essential surgery had already been cancelled in the main hospitals in Cork since mid-December, “with the decision to postpone remaining essential elective procedures meaning all planned surgery has now been cancelled”.

It is understood that vulnerable patients awaiting essential surgery will be affected by the decision as timely access to planned procedures is critical. This includes cancer patients waiting for a number of time-critical procedures.

What do the consultants say?

IHCA president Dr Donal O’Hanlon said: “The decision to cancel all remaining elective surgery at Cork’s acute public hospitals is simply not acceptable. It is forcing hospitals and the consultants who treat patients to determine which patient is more worthy of treatment.

“No hospital consultant wants to tell a patient waiting for essential breast or prostate cancer surgery that their critical treatment has been cancelled and, worse still, that they are not in a position to tell that patient when it will be rescheduled.

“The decision to cancel life-enhancing surgery for patients with conditions such as cancer, where it is accepted that early surgical intervention is key to better long-term health outcomes, is another knee-jerk reaction and poorly thought out. It undermines our commitment to care for already vulnerable patients.”