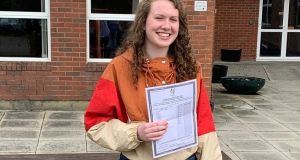 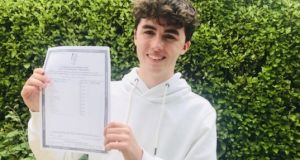 Fiachra O’Farrell, a student at Gonzaga College, is one of five Leaving Cert candidates to secure maximum grades. 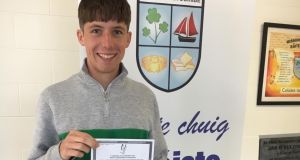 MacDara Allison, from Coláiste Na Coiribe, Co Galway, who got eight H1s in the Leaving Cert on Tuesday 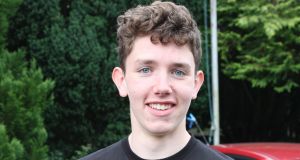 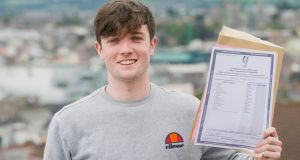 When Fiachra O’Farrell (18) walked into his headmaster’s office this morning to hear his Leaving Cert results, he was feeling “a tiny bit nervous”.

But when he realised he was one of just five students in the country to score eight H1s (90 to 100 per cent), he was floored.

“When he told me my results, I was in shock. I still don’t believe it,” said O’Farrell, a student at Gonzaga College in Dublin.

“I had worked pretty consistently throughout the year and I didn’t think that I’d done too badly, but nothing like this.”

Ellen O’Carroll from Lisdowney was another of the five students in the country to achieve eight H1s.

She sat her exams at the Presentation Secondary School.

It is the second year in a row a student at the all girls school attained top results.

“I’m a bit shocked. I’m still shocked I wasn’t really expecting it at all. My Mam started crying when I told her I got eight H1s.”

MacDara Allison, from Coláiste Na Coiribe, a gaelscoil in Ballyburke, Co Galway, was another student who achieved 8 H1s on Tuesday.

“I just came into school at about 9am, I opened the envelope and I wasn’t expecting eight H1s at all,” he said.

“The principal was more delighted than me I think . . . My dad was over the moon, my mam was just in shock,” he said.

The mixed school is run by City of Galway and Galway and Roscommon ETB, and has more than 550 students, making it one of the largest all-Irish schools in the country.

His twin sister Nell also sat the Leaving Cert in the same school this year, and did very well, he said.

Now he hopes to study theoretical physics in Trinity College Dublin, and took physics, chemistry and biology, in school. Although having to learn the scientific terminology across the three subjects in Irish was “quite difficult,” Allison said.

The family home “wasn’t too stressful” over the year, he said. “I tried to keep on top of the work from fifth year, then from the start of sixth year I would do maybe 30 minutes extra study a night,” he said.

Keeping up activities such as rowing and running, and taking breaks such as a week off after the mock exams, helped him avoid “burn out” over the year, he said.

Instead of being locked in his room studying all year, he says he managed to find time to hang out with friends, take part in the school drama group and practise music.

“You need to have a balance,” he said. “I did work quite hard, but I made sure to take a lot of breaks. I went out with my friends a lot and took part in the sixth year play, Arsenic and Old Lace. I really like music as well as play the guitar, piano and ukelele.”

Instead of following a strict study schedule, he says he was “very disorganised” and says his desk is a jumble of sheets and papers.

He also paid tribute to his family members and teachers for helping him to score such high grades.

“My teachers, especially in science and maths, were really great. They made it all so much easier,” he said.

O’Farrell only took up physics as a subject last December, after realising it was mandatory for his chosen course.

“I was bit nervous about that result, and was worried I didn’t have time, but it all worked out.”

O’Carroll wants to do science in UCD next year but says she understands the importance of getting in some free time away from the books.

“I made sure it was important I got some free time. I went to the gym during the year. Definitely getting away from the books for a while does clear the mind and I found it very good.”

After months of hard work, Bill Fitzgerald (18) was relieved to hear he achieved eight H1s in the Leaving Cert. “I know everyone says it but I mean it when I say I really, really wasn’t expecting it,” he said. “It’s overwhelming.”

Some exams left him in a slump afterwards, believing they didn’t go so well. “But it worked out,” he said. “I can’t believe it.”

Every day after classes at Rockwell College in Cashel, Co Tipperary, Fitzgerald would go for a run and then study at home for a few hours in the evening. Sports helped him feel refreshed and motivated – he also took a taekwando class on the weekends to escape the books.

Fitzgerald studied every day but still made time to socialise. “I have a fairly solid group of friends in school so occasionally we went on a camping trip throughout the year. I went out for Twelve Pubs and St Patrick’s Day as well.” On the weekends, he made sure to unwind whether it was seeing a film at the cinema or getting pizza with his friends.

Fitzgerald’s favourite subject in school was maths. “Even at lunchtime in school the lads and I would be discussing maths problems. I just love the challenge,” he said. He hopes to study engineering in UCD.

The 19-year-old from Mallow said he was “definitely surprised” by his results.

“I wasn’t expecting to do poorly but I didn’t expect to be at the top of the scale with every subject either so when I saw all the H1s I was a bit shocked – English can always be a bit funny but it worked out in the end so I’ve no complaints,” he said.

Michael gave up swimming competitively when he began fifth year, but he credits the fact that he decided continue playing the piano for helping him cope with the stress of exams.

“I’ve been playing the piano since I was seven, mostly classical music, so it was just something I kept on and I always put aside time for music.”

He competed in the International Economics Olympiad in St Petersburg last month but is turning his back on that “most dismal of sciences” to study medicine at UCC.