Man questioned over Kerry hit and run is released 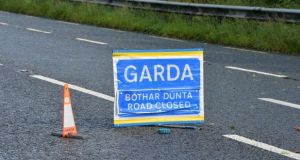 Officers arrested the man late on Saturday night and seized a silver car for a forensic examination as part of their investigation. Photograph: Alan Betson/The Irish Times

A man in his 60s who was questioned about a hit and run incident in Co Kerry which left an 88-year-old man in a critical condition in hospital has been released without charge.

Detectives arrested the man late on Saturday night in the Mallow area and seized a silver car for a forensic examination as part of their investigation into the hit and run on the main Killarney-Mallow Road at Rathmore on Friday.

The 88-year-old victim, who is from Rathmore, suffered serious head and chest injuries when he was struck by a car that failed to stop at Churchview in Rathmore at around 7pm on Friday night.

Witnesses raised the alarm and paramedics attended to the elderly man at the scene before he was rushed by ambulance to Cork University Hospital. He remains in a critical condition at the hospital’s Intensive Care Unit.

Detectives from the West Cork Division arrested the suspect late on Saturday night and brought him to Bandon Garda Station for questioning about the hit and run.

The man, who is from east Kerry, was arrested under Section 4 of the Criminal Justice Act which allows gardaí detain suspects for up to 24 hours before they have to be charged or released.

He was released without charge on Sunday night and gardaí will prepare a file for the DPP.