Man in his 40s dies in apartment fire in Cavan 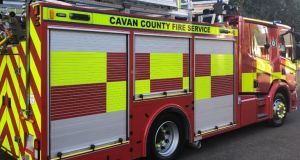 A man has died following an apartment fire in Cavan on Saturday evening.

The man, believed to have been in his 40s, died following a fire at an apartment on Cavan town’s Main Street. Locals called the emergency services after smoke and flames were seen inside the apartment shortly after 8pm. At least two units of the local fire brigade attended the scene.

Firefighters rescued two adults and a child from the building after the alarm was raised, and they were taken to Cavan General Hospital, where they were treated for smoke inhalation.

Two firemen were also injured in the fire, and were treated for minor injuries.

The body of the dead man was discovered on the floor in the apartment’s sitting room when the fire was brought under control. It is thought he died from smoke inhalation.

The body remained at the scene early on Sunday, and a postmortem was expected to take place in Cavan Hospital on Monday.

Garda technical experts spent much of the day at the apartment on Sunday. It is understood that foul play is not suspected.

Gardaí said they were not in a position to name the man who died as he was not an Irish national and efforts to contact his family were ongoing.

A Garda spokesman said efforts were being made to contact the dead man’s friends in Cavan town to ascertain his family connections.