Temperatures to plunge but forecasters rule out widespread snow

‘Wintry precipitation’ due after Sunday evening, but no ‘blankets of snow’ predicted 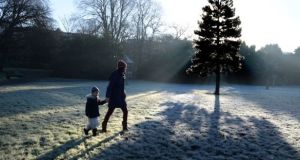 Temperatures are expected to plunge below freezing over the weekend but forecasters are ruling out widespread snowfall.

Liz Coleman, of Met Éireann, said it won’t be “too cold” on Saturday night – between 3 and 7 degrees – because of rain and cloud cover coming in over the country.

But the mercury will start to fall sharply on Sunday evening, bringing with it the likelihood of “wintry precipitation” in the form of showers.

“In terms of blankets of snow – no,” said Ms Coleman.

“We don’t expect that. Showers might fall as sleet or snow on higher ground.”

Showers are predicted in parts of the West on Sunday, with a risk of some of them turning into “wintry falls on higher ground”.

“On Sunday night, there will be a more organised band of showers coming in across country, and with that a higher risk of some wintry precipitation,” the meteorologist said.

Temperatures on Sunday are expected to remain 3 to 6 degrees during the day, but dropping to as low as -1 overnight.

The north west is probably most at risk from sleet or snow showers.

The pattern is set to continue into Monday and Tuesday – with scattered showers, some wintry – before a band of rain coming from the south west on Wednesday is expected to increase temperatures.