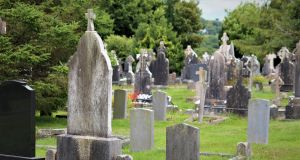 Judge Olann Kelleher said people with relatives buried in St Michael’s Cemetery in Mahon would have been highly distressed if they turned up to discover litter strewn over the graves of their loved ones. Stock photograph: iStock

A judge has strongly criticised the dumping of litter in one of Cork’s main cemeteries as he fined a man €500 after he pleaded guilty to leaving bags of rubbish at the graveyard.

Judge Olann Kelleher said people with relatives buried in St Michael’s Cemetery in Mahon would have been highly distressed if they turned up to discover litter strewn over the graves of their loved ones.

“Imagine if the litter ends up scattered around in the cemetery and the distress caused to people going to the graves of loved ones - it’s not fair,” said Judge Kelleher after hearing evidence in the case of Michael Keenan (36).

Keenan of St Michael’s Close, Mahon pleaded guilty at Cork District Court today to depositing 30 large black bags of household waste so as to create litter in a public place at St Michael’s Cemetery in Mahon on May 23rd, 2019.

Garda Paul Lynch, who investigated the case, told the court that he was on patrol on the night of May 23rd last year when he saw a van belonging to the accused outside the cemetery at 11.20pm.

“Michael Keenan was unloading black refuse bags of rubbish. When asked what was he doing he said, ‘Nothing’. 30 or 40 bags had been dropped in the skip in the cemetery.

“His name was on rubbish in bags found in the skip. The bags contained household rubbish and the like,” said Garda Lynch, adding that the pedestrian entrance to the cemetery was open 24 hours a day.

Keenan’s solicitor, Donal Daly said that while client was pleading guilty to the offence, he stressed that the bags were put into a skip in the graveyard. “They were not thrown around the road or anything like that,” he said.

Mr Daly said that while the charge referred to 30 black refuse bags of rubbish, Keenan believed that he had only put six or seven bags in the skip and that the other bags must have been put there by others.

Mr Daly told Judge Kelleher that Keenan was under considerable stress at the time due to one of his children being seriously ill and Judge Kelleher sympathised with him but said he could not dispose of rubbish in this way.