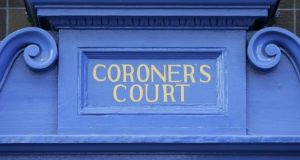 A 76-year-old man died from sepsis due to pneumonia in the lungs, which developed after he had hip replacement surgery, an inquest has found. Photograph: Dara Mac Dónaill

A 76-year-old man died from sepsis due to pneumonia in the lungs, which developed after he had hip replacement surgery, an inquest has found.

John Brennan, of Rathleague, Portlaoise, Co Laois, suffered from advanced gross arthritis in his left hip that was becoming debilitating and creating pain throughout his leg and knee.

In early October 2017, he was referred by his GP to Dr Paul Nicholson in the Beacon hospital for an elective hip replacement surgery which took place on November 23rd, 2017.

Immediately after the surgery, Mr Brennan, who worked part-time as a builder up until the days before the procedure, was described by hospital staff as doing well and being in stable condition.

On November 25th, 2017, Mr Brennan developed a high temperature of 38.2 degrees but there were no other signs of infection. A septic screen was performed, and antibiotics were withheld at that time.

On the 26th of November, Mr Brennan was nauseated and vomited but his high temperature had settled.

Speaking at the Coroner’s Court in Dublin, Dr Nicholson said he attended the patient around midday on Sunday November 26th and that when he saw him, Mr Brennan was doing well. His clinical notes also add that there was no sign of clinical sepsis at that time.

There was an “acute deterioration” in Mr Brennan’s condition the evening of Monday the 27th of November. Attending nurses described Mr Brennan as vomiting bile and belching.

At about 10:20pm that evening, he became breathless, had low oxygen, low blood pressure and a high temperature.

He went on to have a full septic screen, a portable chest x-ray, intravenous resuscitation and antibiotics and he was transferred to the intensive care unit at approximately 1:30am.

Despite full, ongoing intensive care intervention, he died at approximately 8:19am on November 28th 2017.

Dr Myra Cullinane, the Dublin Coroner, ruled that the cause of death was “sepsis due to bilateral bronchopneumonia status day five post-elective surgery” which was contributed to by ischemic heart disease due to a high BMI.

Speaking during the inquest, Dr Nicholson said he was “extremely saddened by the rare rapid deterioration” of Mr Brennan’s condition.

Dr Nicholson added that Mr Brennan was a “lovely man”, and expressed his “sincere condolences to the family”.

Legal representatives for the hospital also added that the matter was being taken “very seriously” by the hospital.

Speaking on behalf of Mr Brennan’s family after the inquest, Johan Verbruggen, their solicitor, said they were happy the inquest took place.

“They are glad to finally have answers to explain what caused their father’s death after what we thought was a straightforward surgery,” Mr Verbruggen said. “They were in shock in the immediate aftermath of his passing, but they still miss and love him everyday.”

Dr Cullinane recommended that the hospital offered training in relation to the transition from paper to electronic patient record system, and to implement active communication of investigation results between nursing and medical staff.