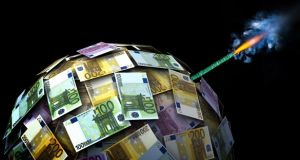 People Before Profit TD Bríd Smith dismissed the ‘pensions timebomb’ as ‘a myth. Is it though?

Next year’s extension of the State pension age by another year to 67, depriving those who retire at 65 of the right to their full pension for two years, has become a major election issue.

Political parties are promising changes to the phased increase in the pension age introduced in 2014 to reduce the cost of the State’s pension bill, which will over the coming decades as the population gets older and the ratio of working-age people to pensioners falls.

Sinn Féin and People Before Profit have pledged to change the State pension age back to 65. Both parties have dismissed the financial consequences facing the State from funding pensions for a larger number of people with a smaller proportion of working people.

Sinn Féin leader Mary Lou McDonald has said that “the demographics will look after themselves” and People Before Profit TD Bríd Smith dismissed the “pensions timebomb” as “a myth”.

Smith said there was “no empirical evidence” to show that the ratio of working-age people to pensioners would decrease, as forecast. She said that she believed the population would “more than likely” grow, increasing the ratio of younger workers to pensioners.

What do the statistics say?

Expected future population changes led the government to raise the State pension age. The population is set to get older, meaning the number of older people is set to increase.

The Government’s 2019 National Risk Assessment report said that notwithstanding the proposed increase in State pension age from 65 to 68 in 2028, the number of people at State pension age and older would more than double from 586,000 to 1.4 million by 2055.

An actuarial review, published in 2017, of the Social Insurance Fund, into which PRSI payments are made by workers and from which State pensions are paid, by accountants KPMG found that the ratio of workers to pensioners aged 66 and over will decline from 5:1 to 2.9:1 in 2035 and to 2:1 by 2055.

The National Risk Assessment says that the ratio will increase in the future “in the absence of improbably large immigration of people of working age, which will impact on areas such as education, child income supports, healthcare, long-term care, transport, employment, housing and pension provisions”.

The low ratio of working-age people to pensioners would, according to the 2017 actuarial review, present significant funding challenges with the Social Insurance Fund forecast to accumulate a potential deficit of up to €335 billion over the next 50 years.

The problem is exacerbated by the low number of people in the private-sector workforce with private pensions. Only 35 per cent of private-sector employees are covered by a supplementary pension, presenting significant risks to the funding of future pensions.

So is the pensions timebomb “a myth” and will “the demographics look after themselves”?

Not based on the available evidence.