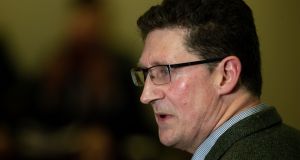 Green Party leader Eamon Ryan: “Betting on not having to measure methane would be a fundamental mistake and a high-risk strategy for the farming community.” Photograph: Tom Honan

Leo Varadkar and Micheál Martin have underlined that they will not support any attempt to reduce the size of the national herd with a view to cutting agricultural carbon emissions.

The Fine Gael and Fianna Fáil leaders were speaking to the national council of Irish Farmers’ Association on Tuesday evening.

Mr Varadkar and Mr Martin also assured farmers there would be no ending of live exports or withdrawal of a derogation for farmers from the demands of an EU nitrates directive designed to reduce water pollution.

However, Green Party leader Eamon Ryan, who may be part of a coalition with either of the bigger parties in forming a new government, laid out the need to cut the herd to address “the climate challenge”, to end live exports and cease the derogation because of deterioration in water quality of rivers and lakes.

During a scrutinising of party policies on Brexit, Common Agricultural Policy (CAP) reform and climate action, Mr Varadkar said there would be no attempt to cut the herd. However he said this meant everything else in a Teagasc plan would have to be implemented to ensure the required emissions reduction.

If he was in government-formation talks with the Greens, Mr Varadkar said he would stress the overall objective of reducing emissions and increasing biodiversity.

“ The agri-food sector has become more climate efficient in recent years,” he said. “But we need to do more. ”

IFA president Tom Cullinan asked Mr Martin if retaining live exports would be a red line in forming a new governmentwhile noting “another party [the Greens] have a different view”.

Mr Martin said he was not inclined to declare red lines but added: “Live exports will continue.”

On the issue of methane from agriculture, he and Mr Varadkar said they would have to look at the science before deciding it should be treated differently to the greenhouse gas CO2.

Mr Ryan warned that “betting on not having to measure methane would be a fundamental mistake and a high-risk strategy for the farming community”. He said methane could be used to generate renewable energy by deploying anaerobic digesters using farm wastes “at the point of generation”.

When asked about carbon tax increases penalising farmers by way of “a €700 million hit”, while the aviation sector was paying nothing, Mr Ryan accepted a lot of farmers were in crisis. He said ensuring they were paid properly would ease the effects of necessary increases in the price of agri-diesel. His response was greeted by groans in the audience.

When it was noted the nitrates derogation applied to only 6 per cent of farmers, who were in dairying and contributing €900 million to their local economies, he replied: “How should we address the water quality issue?”