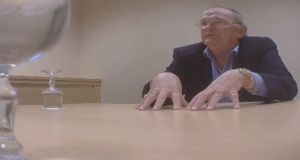 Monaghan councillor Hugh McElvaney was the subject of an RTÉ Investigates programme broadcast in December 2015.

Former Fine Gael councillor Hugh McElvaney has been found to have breached ethics laws for public representatives, after he was recorded asking for “loads of money” in return for assistance securing planning permission for a wind farm project from Monaghan County Council.

Mr McElvaney, now an Independent member of Monaghan County Council, was recorded making the comments to an undercover journalist posing as a representative of a fictitious British investment company seeking to develop wind farms in Co Monaghan, as part of an RTÉ Investigates programme which aired in December 2015.

Following the programme, the Standards in Public Office Commission (Sipo) opened an investigation into the matter. The investigation has concluded Mr McElvaney breached ethics laws, and had failed to uphold the code of conduct for elected councillors.

The commission’s report, published on Tuesday, found Mr McElvaney “conflated his roles as councillor and businessman and used his position as councillor in order to promote his private interests by agreeing to provide information and assistance to the fictitious investment company in respect of the planning process in return for a financial reward”.

The hearings of the ethics investigation began in September 2018, but were adjourned while Mr McElvaney took an unsuccessful legal action in the High Court to attempt to halt the inquiry. The hearing resumed in December 2019, before the report was published on Tuesday.

The report said that in return for financial reward Mr McElvaney had “offered to provide information and assistance to the fictitious investment company, by assisting in identifying potential sites, dealing with local opposition and with the planning application once submitted to the council”.

The report found it was significant that in a telephone call with the undercover journalist in October 2015 it was Mr McElvaney “who initiated the discussion of payment for the provision of assistance with the planning process”.

The report added that Mr McElvaney had put forward a figure, quoting him as being recorded stating that “10 grand would be a start . . . the more that’s in the bag, the keener I would be”.

The Sipo report noted that “on a number of occasions in the course of this initial discussion, councillor McElvaney emphasised the importance of confidentiality of their discussions”.

Mr McElvaney, who was first elected in 1974, criticised RTÉ following his re-election to Monaghan County Council last May despite the controversy, telling the broadcaster to “go back in the swamp where you belong among the reptiles and snakes”.

The report found Mr McElvaney permitted “his private and personal interests to come into conflict with his duties as a councillor”, in breach of the code of conduct for councillors, which prohibits individuals using their official position to benefit themselves.

“The commission is of the opinion that councillor McElvaney behaved in a manner which was not based solely on the consideration of the public interest,” the report said.

“This conduct was liable to erode, rather than enhance, public trust and confidence and to bring the integrity of the office and of the local authority into disrepute,” it said.

When contacted Mr McElvaney said the matter was “aul news” and he had no further comment to make on the findings of the Sipo investigation.