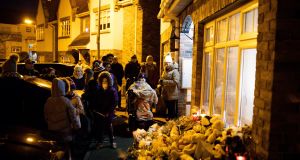 The mother of the three McGinley children has been charged in connection with their deaths in Newcastle, South Dublin.

Deirdre Morley was arrested on Tuesday evening and taken to Clondalkin Garda station on Tuesday night where she remained overnight.

According to a garda spokesman she was charged “in connection with the death of three children” at their home last Friday.

She will appear before the Criminal Courts of Justice in Dublin at 4.30pm when the court will hear details of the charge.

Their mother was found by a taxi driver in a disorientated condition near her house shortly before the children’s bodies were discovered. She was treated in hospital before being arrested on suspicion of murder on Monday night and taken to Clondalkin Garda Station for interview.

“The woman arrested was found at the scene and has been receiving medical attention at Tallaght University Hospital following the incident. She is currently detained at Clondalkin Garda station under section 4 of the Criminal Justice Act, 1984,” the Garda statement said.

The children’s father, Andrew McGinley, earlier released a statement via the Garda saying the children had “beautiful, bright futures” ahead of them and that since their deaths “every breath is a struggle”.

“Conor, Darragh and Carla are adored. They all had beautiful, bright futures ahead of them with family, friends and a community who love them.”

Gardaí believe the children were killed in their home on Friday afternoon while they were in the care of their mother, a nurse at Our Lady’s Children’s Hospital, Crumlin, in Dublin.

Ms Morley has been on stress-related leave from her job for a period and has suffered with depression for some time. She was discovered by a taxi driver on the street in the general area of her home in a disorientated state. She was brought home but collapsed outside the house and the driver called the emergency services.

She was taken by ambulance from her home to Tallaght Hospital last Friday around the same time the emergency services and her husband, Mr McGinley, found the children’s remains in the house.