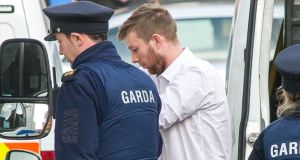 A 27-year-old man charged with murdering his mother told gardaí that he had no recollection of assaulting her after drinking two bottles of wine because he was depressed about not being able to talk to women.

Paul Horgan denied a charge that he murdered his mother, Marian (60), at the family home at Murmont Avenue in Montenotte, Cork on November 24th, 2015 before a jury of nine men and three women at the Central Criminal Court in Cork.

On Tuesday Det Garda Mark Durcan went through a memo of interview with Mr Horgan following his arrest. Ms Horgan was found with a stab wound to the head and another to the shoulder in the family home at about 8am.

Mr Horgan told Det Garda Durcan and Det Garda Tony Holmes that he was doing a computer course at Cork College of Commerce but on the day in question he got up at 6pm and then stayed reading in his bedroom until 11.30pm. He went downstairs when his father came home at about 1.20am.

Asked by the detectives at the interview, if he would often drink two bottles of wine, Mr Horgan said that he drank when he was depressed and it annoyed him that he could not talk to women and he even wasn’t very good on dating sites.

“(I drink) when things are bad, things going through my head, freaking myself out because I cannot talk to women. That is all I think about... I was drinking to forget,” he said, adding that he last had a girlfriend some two years earlier but she had left him for another fellow.

He told gardaí that he did not have a great relationship with his father, whom he hardly spoke to. He said he frequently argued with his mother but that the arguments were usually over minor things and didn’t involve shouting. Neither of his parents knew that he smoked cannabis.

He said that on the Halloween weekend some three weeks before the attack on his mother, he had fallen outside the Old Oak pub on Oliver Plunkett Street after drinking about four pints of beer. He said he had to be taken to hospital and that his mother hadn’t really spoken to him since then.

Asked about stabbing his mother, cuts to his father’s head and being witnessed coming out of the house carrying two knives, he said that would explain the cuts to his own hands. “Is my dad alright? Knives! What the f***. I will probably get life. I never did anything like this before,” he said.

Asked what type of person would stab their own mother, Mr Horgan said that he did not remember what had happened. “I was the only one in the house that could have done anything like that. It was obviously me. I have listened to statements saying it was me. I still don’t remember.”

Earlier the trial heard evidence from Assistant State Pathologist, Dr Margaret Bolster that Ms Horgan suffered two stab wounds, one in the right shoulder area that would not have been immediately fatal and one at the back left of the skull which proved fatal.

Both wounds would have required considerable force.