FAI has been run ‘like a fiefdom’, Harris says 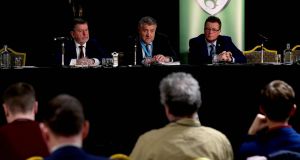 FAI has said it is hopeful of securing the €18 million in funding it needs in order to implement its survival plan. Photograph: Ryan Byrne/ ©INPHO

The Government will stand by Irish soccer but that is very different to standing by the bad practices seen in the FAI, the Minister for Health Simon Harris has said.

“It is extremely concerning what we saw in the FAI. . It stinks. It portrays an arrogance we have seen in lots of other parts of Irish life but I like to think we have left in the past when the Celtic tiger died a death in our country.”

Mr Harris said the Government would decide how best to support Irish soccer in the coming weeks after the Minister for Sport Shane Ross held talks with various stakeholders.

However, he said that before funding could be provided the Government would have to have confidence in it.

He said the Government could not just sign a blank cheque.

Mr Harris said he noted the FAI had issued an apology on Sunday “but I do not know what they were apologising for”.

“They chose just to apologise and say sorry. I suppose that is better than not saying sorry. But I would like to know what they are sorry for.”

Yesterday, the FAI has said it is hopeful of securing the €18 million in funding it needs in order to implement its survival plan but after its reconvened agm at Citywest in Dublin, acting chief executive Paul Cooke, seemed unable to confirm that it even has the funds to pay its wage bill at the end of January.

“I think it [the association] can can stay in one piece, the [business] plan is robust but we need every stakeholder to engage here because we are in dangerous territory,” he said. “I mentioned liquidation earlier and we are heading damn close to the red zone.”

Asked specifically if there is the money to pay staff next month, Mr Cooke said that: “At the moment we are in discussions. But if we ever go into a position where we can’t see the future, the directors have a decision to make.”

In the meantime, he seemed to be sending a message to Government regarding the urgency of the situation.

Mr Cooke said that the association’s directors have been told that as long as negotiations with the association’s banks, the Government and Uefa regarding a rescue are ongoing then they cannot be accused of reckless trading. But, he observed “if those negotiations were to break down, the solvency process is something that could happen. That could be examinership, it could be even liquidation”.

Liquidation, he suggested, is “the nuclear option”.

Despite the talk of worst-case scenarios, there was clearly the belief the Government will ultimately come on board with the other stakeholders and provide the support the association says that it needs.

Senior Uefa officials are to visit Dublin to discuss the situation with Government on January 14th but the FAI wants to broaden those talks out into “a round table” and after an unpublicised meeting between the board members and Minister Shane Ross on December 20th that is said to have gone well, (much better, at least, than the widely reported one four days earlier).

There is the definite sense that an agreement can be reached especially in the light of encouraging public comments from both Ross and Taoiseach Leo Varadkar.

Departing association president Donal Conway, who has not been attending the meeting with the Minister, sought to see things from the Government’s perspective.

He had no complaints, he said. “The reality is we brought all these problems to our own door.”