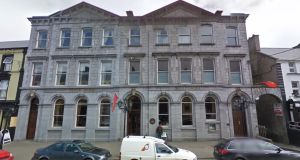 People in Charleville have welcomed the news that Mallow Credit Union has expressed an interest in establishing a branch in the town after a provisional liquidator moved in last week to close down Charleville’s credit union.

Over 500 former members of Charleville Credit Union attended a public meeting in the town last night organised by Cllr Ian Doyle, who expressed confidence that there would soon be a functioning credit union operating in the town again.

Mr Doyle said the board of Mallow Credit Union, which has taken over a number of other credit unions in the area, had expressed solidarity with the people of Charleville and is interested in extending its operations to Charleville.

In a statement, the board said it was “ highly conscious of the critical need for credit union services in the Charleville community and stand ready and willing to support the restoration of these services.”

It said: “As such, we are giving strong and serious consideration to extending the common bond of Mallow Credit Union to service the members of Charleville Credit Union and the Charleville area. An extension of our common bond would require our members’ approval and regulatory approval.”

The move followed the decision by the Central Bank to go to the High Court last Friday to seek the appointment of accountants, David O’Connor and Jim Hamilton of Dublin firm BDO, as joint provisional liquidators to Charleville Credit Union.

The credit union was not insolvent with savings of €40 million, but problems dating back to 2009 - when it gave out loans during the property bubble resulting in €15 million in toxic loans - meant its reserves fell short of the level required by the Central Bank.

On Friday at about noon, the liquidators, accompanied by security personnel, moved into the credit union on foot of the High Court order, closing it down so suddenly that some members of the public contacted gardaí in the town as they thought the credit union was being robbed.

Twelve staff working at the credit union are to be paid statutory redundancy this week and last night the credit union’s former chief executive officer, Annette Kiely, spoke of “their shock and utter devastation” at the actions of the Central Bank in appointing liquidators to the credit union.

“We, the staff, come from and are part of the local community- we didn’t just work at the credit union to make a living - but we love what we do, helping our neighbours, friends and everyone in the community improve their lives,” she said.

Chairman of the board of Charleville Credit Union Pat Savage, who took over with a completely new board in 2010, laid the blame for the closure firmly at the door of the Central Bank, saying it had failed to do its job properly as a regulator during the property bubble of the Celtic Tiger years.

“It was just like the country -we inherited a mess but if the Central Bank had done its job properly as a regulator, Charleville Credit Union would not have been in a mess and we did our level best to keep it operating but the Central Bank put huge restrictions on our ability to operate,” he said.

He said the Central Bank had restricted the credit union to lending no more than €15,000 to any one member and to giving out no more than €250,000 in loans each month, which severely limited its operations and led to the loss of some of its 12,000 members.

Credit union member Tony Connolly suggested a petition to express their anger over its closure even though their savings are safe.

“We need to let our voice and anger be heard by government so they know the injustice and wrong that has been done us,” he said to loud applause.