Cork experience with emergencies bolstered it for Storm Ophelia 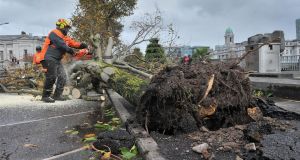 Cork region’s long experience in dealing with significant weather events stood to it when it came to its preparations for Storm Ophelia.

Assistant fire chief with Cork City Fire Brigade David Spillett explained that, following the introduction of the Major Emergency Framework in 2006, plans, including the creation of a local co-ordination centre, were put in place in Cork to deal with major emergencies.

While counties Cork and Kerry had more than 30 years of experience dealing with tragedies such as the Betelgeuse disaster in Bantry Bay in 1979 and the Air India atrocity in 1985, it was the more recent Manx2 air crash at Cork Airport in 2011 that saw a major emergency plan being put into operation.

Mr Spillett said that while Ophelia was not officially declared a major emergency, as had happened with the Manx2 tragedy, all the systems and structures of a major emergency, including the activation of a local co-ordination centre were put into place by the relevant agencies.

He explained that Cork City Council, the HSE, the Garda and the Fire Service were monitoring Hurricane Ophelia’s progress last week but they began ramping up preparations on Friday with groups meeting over the weekend to assess risk.

These meetings had started with assessment teams from various departments in Cork City Council, including engineers from its environment department with expertise in drainage, examining the predicted weather event and its likely impact in terms of flooding and other damage.

“The assessment teams look at the various models – those from Met Éireann, the OPW [Office of Public Works], the ESB in terms of discharges from dams – and put it all together to assess whether the event is going to impact Cork and where, so that was going on over the weekend,” he explained.

“Then on Monday morning at 7am, we had the full activation of the local co-ordination centre here at Cork City Fire Brigade headquarters on Anglesea Street and it was manned by 40-50 people from the various agencies throughout the duration of the storm.

“It has been activated before – mainly for planned events such as marathons and the visit of Queen Elizabeth – and on a smaller scale for other severe weather events, but this was one of the largest activations in recent years.”

Sitting above the local co-ordination centre is a regional steering group for emergency management across counties Cork and Kerry with the chief executives of the three local authorities – Cork City Council, Cork County Council and Kerry County Council – being joined by senior gardaí and HSE management.

While the most recent severe weather events in Cork, such as the 2009 storm, resulted in flooding of large parts of the low-lying western parts of the city, Storm Ophelia posed a different challenge, as it did not coincide with high tides, so tidal flooding was avoided.

“With floods you can predict a certain amount – you know what is going to happen and what areas will be affected if river or tide levels reach a certain height. With wind, you know there will be structural damage but you may not be able to predict what type or extent or where it will happen.”

He said they were very conscious of the number of cranes around the city, given the level of construction work, “so we factored that in, but we still had structural damage at Turners Cross where one of the stands was damaged and at Douglas Community School, where the roof of the gym was blown off.

“But I suppose the main damage and disruption was caused by trees and telegraph poles coming down in the very strong winds and bringing down power lines leading to power outages. We had over 100 trees coming down in the city, including over 30 alone on the Centre Park Road.”

While improvements in weather forecasting by Met Éireann proved of huge assistance in accurately tracking the progress of Storm Ophelia, Mr Spillett identified improvements in the local co-ordination centre’s communications strategy as also being vital. “Improvements in communications and using social media all fed into our warnings to the public and the public heeded them – there were always going to be a few wandering around the streets but, looking out yesterday, there was very little traffic and very little pedestrian activity.

“And that definitely contributed to the fact that there were no fatalities and minimal injuries in our region. And while it takes only one incident to change that, we were delighted with the public response. We are still in the recovery and assessment phase, but so far it’s gone well.”