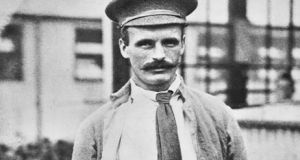 Martin O’Meara: “This man has been responsible for the evacuation of at least 20 men under conditions that are indescribable”

In November 1918, Martin O’Meara arrived back in Australia as a hero, promptly had a nervous breakdown and spent the rest of his life in mental institutions.

O’Meara won a Victoria Cross in August 1916 during the worst days of the Battle of the Somme, when he went out innumerable times to rescue men wounded in no man’s land.

Usually a Victoria Cross is won for one significant act of gallantry, but his comrades testified time and again to O’Meara’s extraordinary bravery.

“This man has been responsible for the evacuation of at least 20 men under conditions that are indescribable,” one testified on his behalf.

O’Meara was born in Lorrha, Co Tipperary, in 1885. He is the only Irish-born winner of the Victoria Cross in the Australian forces during the first World War. He emigrated to Australia in 1912, where he worked as a wandering labourer until joining the Australian Imperial Force in 1915.

He was wounded three times in 1916 and 1917. In 1918 he was shipped back to Australia to revive the flagging recruitment campaign.

By the time he got there the war was over and so was what was left of his freedom. He had a severe nervous breakdown on arrival in Perth, and was quickly diagnosed with “delusional insanity”.

O’Meara, doctors concluded, had “hallucinations of hearing and sight, is extremely homicidal and suicidal, and requires to be kept in restraint”.

His biographer Ian Loftus said the severity of O’Meara’s mental breakdown might not be explainable by post-traumatic shock disorder (PTSD), known at the time as shell-shock, alone, but could be a combination of factors including severe isolation – he arrived back into Australia knowing nobody and without a roof over his head.

He spent the rest of his life in two mental institutions in Perth, and died aged 50. For long periods during his incarceration he was in a straitjacket for 16 hours a day.

On Thursday, to mark Anzac Day, Minister for Justice Charlie Flanagan will announce that O’Meara’s Victoria Cross is to be repatriated to Ireland on loan to the National Museum of Ireland.

These repatriations by the Australian government are so rare that it needed an act of parliament to allow the medal to leave the country.

The Australian ambassador to Ireland, Richard Andrews, said the repatriation of the medal was in recognition of the close historical ties between Ireland and Australia.

The first World War led to sectarian tensions in Australia between Irish Catholics and the mostly Protestant establishment in the country. Catholics, led by their redoubtable Cork-born Archbishop of Melbourne Daniel Mannix, were blamed for the defeat of two divisive conscription referendums in the country. The Irish were branded as shirkers and disloyal.

One of Mr Andrews’ first actions as ambassador was to the launch Gerard O’Meara’s book Lorrha People in the Great War.

“The participation of Irish in the first World War is less well known in Ireland than it is in other places for historical reasons that we all know about and understand. This kind of thing gives us a chance to look back at that history,” he said.

“There was a lot of politics around the conscription referendum, and the Australian prime minister at the time, Billy Hughes, wasn’t averse to pointing the finger of blame at the Irish. It probably played into a sectarian situation in Australia. There was a degree of political opportunism in it.”

O’Meara features in a recently released album Poets in the Trenches by American-based musician Martin Butler.

The National Museum of Ireland director, Lynn Scarff, said she was “delighted” that the Victoria Cross would go on exhibition in Collins Barracks later this year.

“We are especially honoured given that it is the first loan permitted under new Australian legislation. This loan will provide us with a new opportunity to strengthen the ongoing work and connection between our two countries’ histories and heritage.”