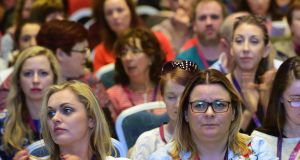 Pupils in single-teacher schools are practicing emergency drills in case their teacher falls ill in the classroom, the Irish National Teachers’ Organisation has heard.

Many rural schools with just one or two teachers are highly vulnerable and face major health and safety concerns, Eoin Fenton, a Galway-based teacher told delegates at the conference in Galway.

One small school in Co Galway has a list of emergency phone numbers on the school whiteboard.

“There’s the number of the chairperson, the local Garda station, parents, etc. Nobody should feel the need to run that drill,” he said.

One teacher, Pádraig Lohan, principal of a small school in Derryoober, Co Galway, said he had given his pupils the passcode for his mobile telephone in case of an emergency.

“ It was so they could call the nearest people and family always. Thank God that never happened,” he said, adding that teachers working on their own must constantly keep pupils under supervision, not even taking a toilet break.

The isolation, he said, meant he looked forward to “the visit of the postman every day”.

“And I did look forward even to the Rent-A-Kill guy. I looked forward to the special delivery guys.”

His school recently gained a second teacher after pupil numbers rose from seven to 16.

In January, the Department of Education announced it would provide a grant to ensure there is more than one adult on the premises at all times.

On Wednesday, INTO delegates demanded that no school should have less than two full-time teachers, while they also argued that enrolment thresholds for third and fourth teachers be restored to previously lower levels.

Falling enrolments at primary level due to demographic change gives the Minister for Education Joe McHugh a “unique opportunity” to reduce class size to the EU average of 20 pupils per teacher with “minimal or no cost” to the State.

Irish class sizes of 25 pupils per class are among the biggest in the EU, second only to the UK: “It’s simple, Minister – hold on to our primary teachers as the number of pupils drops,” said INTO general secretary, John Boyle.

Many schools are forced to hold bake-sales and raffles to pay basic bills.

This is because the capitation grant per pupil has dropped from €200 in 2010 to €70 at primary level. The equivalent figure at post-primary is €296.