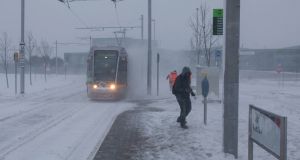 A Luas tram at the Red Cow junction: Siptu shop steward Marc Winters said proposals to run trams were a danger to drivers and the proposals were “total nonsense”. Photograph: Gareth Chaney Collins

Luas operator Transdev has backed down over plans it had to run trams overnight in a bid to keep lines clear during the red alert weather period, following complaints from drivers.

Transdev stopped all passenger services on Thursday at noon, but said it would keep a number of trams running to ensure services could resume as quickly as possible.

It planned to run services during Thursday night and Friday morning despite a Government warning everybody should be indoors from 4pm on Thursday and that driving was “suicidal” as there would be “zero visibility”.

The company told staff it must operate a non-passenger service throughout the night to keep the tracks and depots operating and to ensure “that a passenger service can be restored as soon as it is safe to do so”.

In a notice sent to all staff, Transdev told them: “A full workforce will be required on Thursday. Staff required to work between Thursday 12 noon and Friday evening will be contacted by the planning team or their line manager.”

It told drivers who could not make it home from work that they could stay in hotels near the Luas depots.

However, the move was rejected by Siptu which represents Luas train drivers. Shop steward Marc Winters said proposals to run trams were a danger to drivers and the proposals were “total nonsense”.

He said: “This would never have happened with Dublin Bus or Irish Rail, but because we are a private contractor, we are obliged to do what we are told to do.”

A spokeswoman from Transdev said the company had changed its mind on running tram services following meetings on Thursday morning.

She added: “Engineering trams may not be an option at this point to operate on Thursday or Friday.”

A Transdev spokeswoman said the Luas network was under “continuous assessment” through the severe weather period and a decision was made not to run engineering trams (trams outside of passenger service) earlier on Thursday. She said it was not possible to know when the Luas would be back in service, but customers would be updated as of 1pm on Friday.