Met Éireann issues midnight alert for Munster, Leinster and Galway as blizzard forecast to dump up to a metre of snow in parts 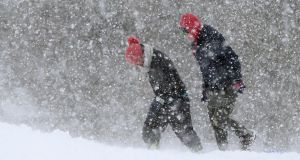 Walkers in the snow on the Curragh in Co Kildare. Photograph: Niall Carson/PA Wire 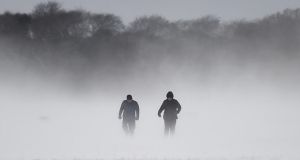 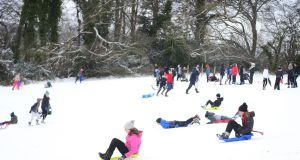 Hundreds of people took to the ‘slopes’ in Bushy Park, Terenure, Dublin on sleighs, sledges and dustbin lids to slide on the snow. Photograph: Bryan O’Brien/ The Irish Times 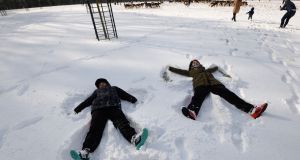 Rez and Nwa Keshani from Kurdistan, North Iraq enjoy the snow in the Phoenix park during the snowfall associated with Storm Emma - The Beast from the East. Photograph: Alan Betson/The Irish Times 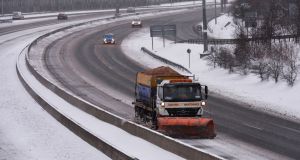 Clearing a path, a gritting snow plough on the M50 near Ballymount during the snowfall associated with Storm Emma. Photograph: Alan Betson/The Irish Times 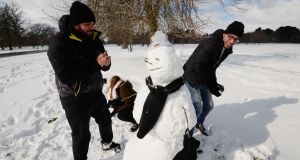 Izabella Mimic, Bruno Felippe and Pedro Caldas from Brazil in Snow for the first time in their lives build a snowman in the Phoenix Park. Photograph: Alan Betson/ The Irish Times 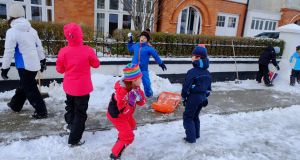 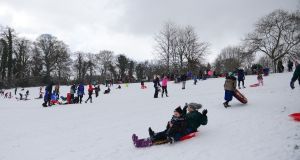 Hundreds of people took to the ‘slopes’ in Bushy Park, Terenure, Dublin on sleighs, sledges and dustbin lids to slide on the snow. Photograph: Bryan O’Brien/The Irish Times

Heavy snow and sub zero temperatures are expected  to continue on Friday and over the coming days as Ireland experiences its most severe big freeze in decades.

A red weather warning is place for Galway, Leinster and Munster until 6pm on Friday, but Met Éireann says it may issue new alerts as the cold snap extends into the weekend. The weather warning, the forecaster's most serious, warns of continued blizzard conditions on Friday with "exceptionally high accumulations expected".

Up to a metre of snow could accumulate in some parts and many have been left with electricity.

A status orange weather alert is in place for for Cavan, Monaghan, Donegal, Leitrim, Mayo, Roscommon and Sligo.

"I’d say there’s every likelihood of a further orange, maybe red over the weekend, obviously we’ll be monitoring the situation extremely carefully," she said on RTE's Prime Time. "So as regards to the really heavy snow, there’ll probably be an end of sight hopefully, to the actual heavy snow, Saturday night.

"After that it’s still a very cold regime, there’s a gradual edge up on those temperatures..... a very gradual thaw will come.

"I wouldn’t be surprised if we get record breaking snowfalls totals between now and 1800 hours on Saturday. There is every possibility of up to metre high snow along parts of the east.

"At the moment in the short term I would be concerned about the south Dublin area and Wicklow area as well”.

Taoiseach Leo Varadkar pleaded for people to stay indoors while the red alert was in place.

The freezing conditions are a consequence of the so-called ‘Beast From The East’ weather system and Storm Emma, approaching from the south with its 100km/h gales, crossing paths.

Earlier, Mr Varadkar said: “The risk to life and limb presented by severe weather conditions should not be underestimated by anyone.”

The forecast is for zero visibility, deep pockets of snow and “white-outs. It’s not safe to be outside in such conditions. No-one should be on the roads,” the Taoiseach said.

“We are asking everyone to be at home and safe by 4pm and to remain indoors until the severe weather has passed. I’ll repeat, nobody should be on the roads after 4pm today and everyone should be in home or indoors by 4pm.”

Due to the Red Alert for very heavy snow, all airlines @DublinAirport have suspended flights until SAT am. Please check with your airline re your flight. Our snow crews continue to work 24/7. More here https://t.co/Zx2eyHrA2e #StormEmma #BeastFromTheEast #Sneachta pic.twitter.com/2HBqaHyrTU

Evelyn Cusack of @MetEireann says up to one metre of snow could fall along the east of the country #StormEmma pic.twitter.com/rlowCMXzg5

Checking our rescue boat in preparation for any water rescue calls..... Never venture out on frozen water, it won't take any weight. If an animal is in trouble call for help, don't attempt a rescue. #StormEmma #sneachta #BeastFronTheEast pic.twitter.com/wROkVBrQHg

The National Emergency Coordination Group issued a statement after midnight on Thursday following the issuing of the red weather warning which also advised people in areas covered by the red alert to remain indoors.

It advised the public “to use judgement, taking full account of local conditions, when considering undertaking journeys or venturing outdoors”.

Public transport will be an option for few people across the State with all Irish Rail, Dublin Bus and Luas services cancelled until Saturday. Most Bus Éireann services are also cancelled. There will be no flights in and out of Dublin or Cork airports until Saturday morning at earliest.

Shannon Airport was  operational, although a number of airlines have decided to cancel services. Intending passengers are advised to check with their airlines for updates. However, Ryanair said all flights to and from Dublin, Cork, Kerry and Knock and Shannon airports due to depart on Thursday evening or on Friday have been cancelled.

All schools and colleges are to remain closed until next week and businesses have been urged to heed the weather warnings and consider the viability of opening and the safety of staff making their way to work.

The HSE said the National Ambulance Service was prioritising emergency calls and asked people to “consider if they have an absolute emergency situation before calling for an ambulance”.  It is also advising people with hospital or healthcare appointments to contact facilities before making unnecessary journeys.

The Defence Forces is on standby to deal with emergencies.

Seán Hogan, chairman of the National Emergency Co-ordination Group for Severe Weather, told RTÉ he was satisfied that the national red weather alert had been triggered at the right time.

“We express our appreciation for what people have done over the past day. This was disruptive and difficult for a lot of people but really from our perspective and a public safety perspective, we were in the right place,” he said.

Mr Hogan said the job overnight would be to build up a picture of what was going on across the State and consider how to get the country back to normal.

“It won’t be a case of pulling back the curtains tomorrow and everything will be clear. There will be difficult conditions again tomorrow and we will judge what work will need to be done.”

He also warned of potential flooding when the snow starts to melt. “A lot of snow is going to fall and that is going to melt back to water which will come down from the mountains and into the rivers.,” he said, adding that he could not predict where this would end up.

The Dart line at Seapoint was under water on Thursday and there was significant tidal flooding. There were concerns about tidal flooding potentially hitting Cork city, but high tide passed off at 5.17pm without any significant water spilling on to vulnerable areas.

There are also reports of power outages in parts of Dublin, with approximately 2,000 homes in Donabate in north Dublin.

Shortly after 9pm, ESB networks said 4,500 households were without power across the country, including 2,200 customers in Julianstown, Co Meath who lost power on Thursday evening.

Earlier outages took place in Rathmines/Harold’s Cross, Swords/Malahide and Pelletstown near Phoenix Park. An ESB spokesman said power had been restored to most homes in those areas. While the company was working to restore power to the remainder, this may not be completed until Friday evening given the weather conditions, he added.

Mr Hogan said further power outages were a possibility with strong winds expected and that ESB networks staff will be working to minimise any potential impacts the storm will have.

Seán O’Neill, communications manager with Transport Infrastructure Ireland, said the road network was “doing fine” but “the real issue will be over the next 24 to 48 hours”. He said “nobody should be on the road” after 4pm on Thursday until the weather warning ends.

“It is extreme, we’re not used to it in this country,” he added.

Mr O’Neill said there were ample supplies of salt for the roads, and that national roads and motorways are currently open.

“The real issue here is ploughing and getting the roads clear,” he said.

Health service staff who cannot get to work or whose workplaces are closed will receive emergency leave with pay and will not have to make up the time, the Minister for Health confirmed.

Friday will stay bitterly cold and windy, with further snow accumulating, but with drier periods at times in northern and northwestern counties.

Snow may turn to rain for a time near southern coasts as the day goes on. Strong northeast winds with severe gusts are expected, with highest temperatures -1 to 3 degrees.

There is a risk of some coastal flooding along some southern and eastern coasts through Friday and Saturday.

The strong easterly winds will steadily ease on Friday night and temperatures will be below freezing once again, down to as low as -3 degrees but lower over lying snow.

There will be a mix of snow, sleet and rain in the south, with further snow showers along eastern and northern coasts.

Saturday will be a brighter day, with dry spells developing. The fresh easterly winds will ease for a time but it will remain cold with temperatures from only 1 degree in the east and up to 4 or 5 degrees in the west, coldest over lying snow. The temperatures on Saturday night will be very low again, down to -5 degrees.