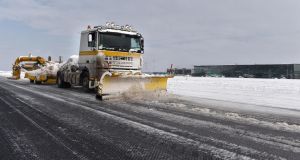 The view at Cork Airport today would not have looked out place in a James Bond movie - a blanket coating of white as far as the horizon, and a lonely snow plough motoring down the runway, sending a spray of snow showering into the air as staff battled hard to keep the facility operating.

The airport was closed at closed at about 1pm on Thursday, with authorities there not expecting to be back in operation until at least Saturday morning. In order to ensure the airport then reopens, the team will continue clearing the runway in the meantime, to avoid an impenetrable build-up of ice.

Watching earlier on Thursday, as a whistling wind all but drowned out the noise from the plough, Cork Airport engineer Brian Culloty explained that he and his team of up to 20 personnel had been working for close to 30 hours to keep the airport’s main runway free for planes to land and take off from.

“We have a couple of local contractors in helping us, but the team here been at it since early on Wednesday morning – we got our first bout of snow around 5am and we came out and cleared it so the first wave of planes could get away, but it’s been all go since then ,” he said.

“We got more snow throughout Wednesday evening and Wednesday night and we were struggling to keep the place clear with 8cm falling, the snow kept coming back at us. We struggled for about three hours to keep it clear for two Aer Lingus flights, but unfortunately they had to be diverted to Shannon.”

Culloty explained that clearance work involves snow ploughs – trucks or tractors with huge blades fitted at the front – pushing snow off the runway, before brushes sweep off the excess and the runway is then sprayed with liquid potassium acetate to keep the asphalt surface snow- and ice-free.

“The potassium acetate is salt-derivative, and that breaks down the snow and ice and it has a freezing point of -15, so it prevents the material from freezing over – when we have ice, we score the ice [surface] and then attack it with the potassium acetate to try and clear it to a depth of at least 3 mm.”

Cork Airport aerodrome fire officer Trevor Healy meanwhile braces himself against biting wind gusting along the 2.1km-long Runway 17/35 as the wind chill pushes the mercury down to -5 on the runway which, at 522ft above sea level, is highly exposed.

“We had bad snow like back in 2010,” said Healy, “but we were able to get a lot of flights in because we had a lot of diversions from Dublin. This is the most severe weather event that we’ve had and if we don’t clear what falls now, it just accumulates and becomes heavy and freezes into ice.

“You can still move the snow when it is soft and even though some is being blown back on to the runway, we can shift it, so we will have to stay here for the next 48 hours to ensure there is no accumulation of frozen snow so we are ready to open again for business at 6am on Saturday.”