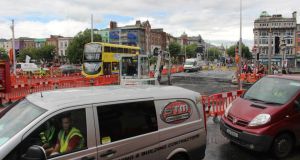 Luas Cross City: the south quay is closed at O’Connell Bridge until 6am on August 12th, while a temporary road surface is replaced

There were long delays on the south quays in Dublin on Saturday as the latest phase of Luas Cross City construction work got under way.

Traffic was backed up in the afternoon from O’Connell Bridge, where the south quay has been closed until 6am on Saturday, August 12th, to the Sean O’Casey footbridge, 800m to the east.

Workmen are digging up the temporary surface at the junction of O’Connell Bridge and Burgh Quay to replace it with a permanent surface. The work is beginning on the bank-holiday weekend because it is the quietest time of year on the roads.

Gráinne Mackin of Luas Cross City said that work was progressing well and that feedback from Dublin City Council and the Garda Síochána was that traffic was moving and that motorists were following advice to stay out of the city centre. AA Roadwatch said it has received no complaints of undue delays.

The first full day of works coincided with the GAA All-Ireland quarter-final double-header at Croke Park, where Tyrone are playing Armagh and Dublin are playing Monaghan, as well as a Liverpool v Athletic Bilbao preseason friendly at the Aviva Stadium.

Richard Guiney of DublinTown, which represents more than 2,500 businesses in the city centre, was also satisfied with public reaction to the roadworks. “It’s certainly not Armageddon by any means. There are six teams in town for the various matches, and the city is coping very well.”

Traffic diverted from the south quays during this week’s construction phase – which will also involve smaller works on Bachelors Walk – is being sent from D’Olier Street and College Green along Dame Street and Lord Edward Street to turn right down Winetavern Street before re-emerging on Merchant’s Quay.

O’Connell Bridge will remain open to northbound and southbound traffic, and access to city-centre car parks will be maintained. The College Green public-transport corridor has been suspended during the works.