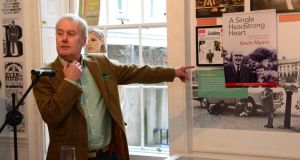 A review by the Sunday Times in London as to how the controversial column by journalist Kevin Myers came to be published is expected to be completed later this week, according to sources.

It is understood columns produced for the newspaper’s Irish edition are read by editorial staff in Dublin then sent to London for subediting (that is, checking spelling, facts and having a headline put on it), before being returned to Dublin to be read for potential legal problems, prior to publication.

Mr Myers said yesterday he believed five or six people would have seen what he wrote before it was published. It was published in the print version of the Irish edition of the newspaper, which is not connected to The Irish Times, and was available also online internationally.

Following criticism, the online version of the column was removed on Sunday. A request yesterday for comments from the London and Dublin offices of the Sunday Times met with no response.

The column, which has been criticised as being anti-Semitic and misogynistic, led to Myers being sacked on the day of its publication. The criticism of the article has been reported widely, as has Myers’s fate, with coverage in Ireland, the UK, Israel, India, the United States and other countries.

One of the few people to speak out in Myers’s defence has been the chairman of the Jewish Representative Council of Ireland, Maurice Cohen, who said the journalist had “inadvertently stumbled into an anti-Semitic trope” but that to brand him as either “an anti-Semite or a Holocaust denier is an absolute distortion of the facts”.

Mr Cohen said that since the statement was issued on Monday, after a discussion with the other members of the council, he had received a positive response, both from Jews and non-Jews. There was no negative reaction, he said.

The worldwide attack on Myers was “unjustified”, he said. “People felt [the statement] was courageous in the light of the opprobrium Kevin was attracting around the world. But it didn’t take much courage, because justice is justice.”

The chairman of the Press Council, Seán Donlon, said his decision to criticise the column had been taken following discussion and agreement that he would recuse himself from any complaint about it that might in time come before the council.

He said he commented publicly on the matter because it was such a “very obvious breach” of the code of practice which is a benchmark the council has a duty to ensure is honoured in spirit as well as in letter.

In particular, he said, the column was a breach of principle eight of the code, which says the press “shall not publish material intended or likely to cause grave offence or stir up hatred against an individual or group on the basis of their race, religion, nationality”, and other reasons.

Mr Donlon has said the council has received complaints about the column, that an apology was expected, and that if no apology was published next week, “we will be in touch with them”.

A founding member of the council, the former chairman of the Labour Court, John Horgan, has said Myers should have been given an opportunity to defend himself before being “hastily dismissed” by his employer.

In a letter to The Irish Times Mr Horgan also said he did not believe Mr Donlon should have “pre-judged” the case by going on RTÉ radio on Monday.