Present-day Galway Bay may only exist for past 1,000 years 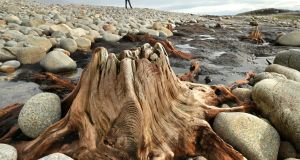 The stump of a 7,500-year-old tree, part of a drowned forest exposed by storms at Spiddal, Co Galway. Photograph: Joe O’Shaughnessy

When the moon rising over the Claddagh and the sun setting over the Aran Islands moved a Fermanagh-born and Galway-tutored medical graduate Dr Arthur Colahan to pen the song Galway Bay in 1947, he probably had no idea that the seascape that had inspired him was of relatively recent origin.

So “recent” that the bay may be just 1,000 years “young”, according to research published by NUI Galway (NUIG) scientists Dr Karen Molloy and Prof Michael O’Connell.

Prof O’Connell and Dr Molloy are palaeoecologists, and their research interests relate to long-term environmental change in western Ireland.

“As knowledge advances, and especially as reconstructions of Ice Age and post-glacial environments improve, scientists have striven to provide ever more detailed answers to complex matters such as the rate of sea level rise and responses of flora and fauna to factors such as climate change and human activity,” says Prof O’Connell.

“Answers to such questions, which are particularly relevant today when we urgently need evidence-based reconstructions of the past to inform predictions of future change, have been the focus of researchers and students at NUIG and collaborating colleagues during recent years.”

He recalls how Danish botanist Prof Knud Jessen came to Ireland in the 1930s at the invitation of the Royal Irish Academy (RIA). Prof Jessen investigated intertidal peats and pine stumps on the shore near Letterdyfe House, Roundstone, Co Galway. He concluded that sea levels in Connemara at the end of the Ice Age (11,600 years ago) and for much of the early post-glacial period – also known as the Holocene – were several metres lower than at present.

Discovery of a log boat on the shore at low-water mark near the village of Barna by local residents Brian and Rónan Ó Carra in late 2002 took knowledge a stage further. It was “particularly exciting” in that it pointed to very different local conditions to those of today, says Prof O’Connell.

“To make the log boat a pine tree that grew 5,500 year ago had been felled, cut length-wise and a ‘dugout’ created to give the boat that today can be seen, imaginatively housed, in the Atlantaquaria at Salthill, ” he says.

“The peat that preserved the boat was deposited at a time when sea level was at least two metres lower than at present.

“The boat had been abandoned in what was swampy ground, and quite possibly at the edge of a freshwater pool. The boat users, as in Neolithic people – the first farmers whose main tools were polished-stone axes – may have seldom ventured onto the saline waters of Galway Bay.”

This is because the same waters were “rather distant” for a small boat which would not have coped well with an exposed open-water environment.

Several further steps were taken when the late NUIG geologist Prof Mike Williams and Dr Eamon Doyle radiocarbon-dated pine and oak stumps from the Galway, Clare and Mayo coasts exposed by winter storms from 2010 and 2013-14. Brian Ó Carra and colleagues got a radiocarbon date for red deer antlers found in muddy deposits beside Seaweed Point, Salthill.

The findings, published in The Holocene journal in June by Prof O’Connell and Dr Molloy, relate to coastal pine and oak stumps, as well as the results of pollen analysis of coastal peat deposits.

“A peat core, collected from near a fulacht fiadh (burnt mound) at the edge of Lough Atalia, Renmore, has given a fossil pollen record of long-term environment change within the present day city,” says Prof O’Connell.

“When the records begin almost 8000 years ago, woodland consisting mainly of hazel and pine. Pine remained important until shortly after 5,000 years ago, when yew expanded and became the dominant tree for about 600 years.”

Dr Molloy, who was responsible for constructing this pollen record, told him she had “never encountered such quantities of yew pollen in the course of the many sites I have investigated”.

“ Indeed, I know of no other place in Ireland and Britain where yew played such an important role,” she said.

By the mid-13th century a completely open landscape had been recorded, says Prof O’Connell. This was connected with the establishment and expansion of the medieval town of Galway under the direction of a Norman, Richard de Burgo, and his son Walter.

Indeed, I know of no other place in Ireland and Britain where yew played such an important role

Prof O’Connell says shortly before that fresh water had given way locally to saline conditions. This is evidence of a rising sea level that resulted in brackish conditions at Lough Atalia, named in Irish as Loch a’ t-Sáile or the saline lake.

Galway city heritage officer Dr Jim Higgins, who commissioned Dr Molloy to carry out this research, says the new data offers “amazing insights into the changing environment within what is now an integral part of Galway city”.

Prof O’Connell credits the assistance of family and students in the research on coastal deposits, including pine and oak timbers, to the west of the city. He says investigations of intertidal timbers –what is usually referred to as “bog deal” – not only confirm lower sea levels, but also point to less stormy conditions in the distant past.

He notes that peat on the shore in front of Galway Golf Club at Salthill records sea level rising to approach present levels as late as the first millennium AD.

“We can now say with confidence that Galway Bay in its present extent has been in existence only for the past 1,000 years.”

Much of the peat at Salthill that yielded this information no longer exists, and he has made a photographic record of the gradual erosion of intertidal peat – caused by increased frequency of severe storms in recent years. He says this makes publication of the research even more timely.

Full details are published in the international journal The Holocene in an article entitled Mid- and Late-Holocene Environmental Change in Western Ireland by Prof Michael O’Connell and Dr Karen Molloy (June 2017).