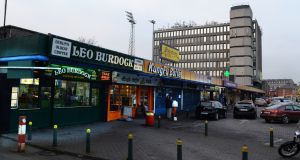 Phibsborough has seen substantial rises in property prices since the Luas opened there a year ago. Photograph: Cyril Byrne

Property values along the new Luas Cross City line in Dublin increased by as much as 8 per cent in the immediate aftermath of the infrastructure’s roll-out, according to local real estate agents.

Some of the buyers are UK investors spooked by Brexit, say agents around Cabra and Phibsborough.

The “Luas effect” means a typical two-bedroom home in Cabra east, which would have previously attracted a sale price of about €350,000, would now be expected to realise €375,000.

“It’s had a huge effect,” said Ciaran Jones, manager of DNG Phibsboro. “The question [from prospective buyers] is: where is the Luas?”

In the run-up to last December’s expansion of the tram network, and its associated link to lines already serving Dublin’s suburbs, the real-estate industry predicted that a rise in prices would probably not be seen until several months after the trams began moving.

That appears to have played out – local auctioneers noticed an increase of 6-8 per cent in sale prices from October 2017 to last March.

It is a similar experience to other areas serviced by the Luas, particularly around the exclusive areas of south Dublin through which the Green Line runs.

Research released by Daft.ie in October found that properties along the Green Line were commanding average prices of €524,000, nearly €140,000 more than the Dublin average.

Paul Lappin of Lappin Estates in Phibsborough said there had been quite a lot of property for sale in his local area in the first six months of the year when prices rose. While this can also be seen as a reflection of a generally rising market, he believes it is mainly a result of the Luas.

“We experienced one [sale in] Broombridge where there is a new station opened. We would have expected a value of about €330,000-€335,000, an extended three-bed in very good order, and we ended up getting €385,000,” he said. “Literally because it was a two-minute walk from the Luas. People were looking at it because it was so close.”

The profile of buyer in the area is now considered to be typically young professionals aged in their 30s, with an upsurge in owner-occupiers in place of previous renters.

Vinnie Mullen of DNG Phibsboro said homes had been attracting sale prices well above estimates, even when the new transport line was factored into asking prices.

“That was an area where prices were pretty static; in the last couple of years we have noticed a jump that’s really down to the Luas,” he said. “There was a gradual change in the lead-up to it and about three months later we began to notice that there was more demand very close to the Luas stops.”

London and wider UK-based investors are also increasingly seen to be entering the Dublin market and have been a feature of property viewings in Cabra and Phibsborough, according to several sources in the industry.

One property viewing earlier this year in the Cabra area attracted 11 investors, including two from Ireland and six from London.

Ken McDonald of Hooke & MacDonald said they had seen a number of people coming over from the UK to invest in Ireland this year.

“It’s not a flood but it’s increasing. It’s certainly becoming a feature of the market,” he said, adding that in one case a party was investing a pension fund in Irish property because of fears around the future of UK investments due to Brexit.

Others are investing with a view towards UK-based multinationals possibly relocating to Dublin and a related expansion in the need for rental properties, he said.