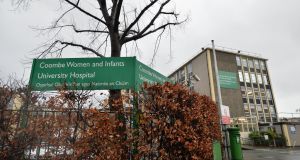 Coombe master Dr Sharon Sheehan has cited issues including the absence of finalised clinical guidelines, models of care and legislation, as well as staff training and resources, for a delay implementing new legislation. Photograph: Alan Betson

The Coombe Women & Infants University Hospital has told the Government it will not be ready to provide abortion services from January 1st as planned by the Minster for Health, Simon Harris.

No hospital in the overall Dublin Midlands Hospital Group will be providing the new service from next month, as Portlaoise hospital, the other maternity unit in the group, has also indicated it is not in a position to provide terminations from January 1st.

Although there is widespread concern among health professionals about the the state of preparedness for the new service, this is the first time one of the major hospitals has explicitly stated it cannot meet the deadline.

It is understood that at a meeting of stakeholders on Monday attended by the Minister, the Irish College of General Practitioners expressed concern about access to ultrasound scanning services under the plans for introducing abortions and regarding referral of women to hospitals.

Informed sources said about 200 GPs have now provided expressions of interest to the HSE about providing abortion services when new legislation comes into effect.

On Monday the Government gave its first public indication that the planned new termination of pregnancy services will not be available in all maternity units from January 1st. Taoiseach Leo Varadkar suggested abortion services would have to be put in place on a phased basis.

Separately on Monday night, the National Maternity Hospital said it believed the new service could not be fully introduced at once.

“We agree with the Taoiseach’s assessment today that this service will need to be phased in. We are continuing to work with the Minister, the HSE and all stakeholders to ensure that a safe and compassionate service can be introduced as quickly as possible.”

Under the Government’s new plans, terminations up to nine weeks of pregnancy will take place in community settings.

Abortions after nine weeks will generally be carried out in a hospital setting, with most of the demand expected to arise in the three main Dublin maternity hospitals and in Cork University Maternity Hospital (CUMH). However, CUMH is also understood to be concerned about its level of preparedness.

At the meeting of stakeholders on Monday, Coombe master Dr Sharon Sheehan said that despite extensive preparatory work in the hospital, it would not be in a position to implement the new legislation by January 1st.

Dr Sheehan cited issues including the absence of finalised clinical guidelines, models of care and legislation, as well as staff training and resources.

She emphasised that the hospital would continue to work with the HSE and other stakeholders towards full implementation, according to a source who was present at the meeting.

The HSE on Monday declined to answer whether abortion services would be in place in all of the hospitals it operates across the country.

In reply to specific questions it said: “The HSE, in consultation with the Department of Health and other stakeholders, is working collaboratively on an implementation plan for the delivery of the termination of pregnancy service by January 1st, 2019.”