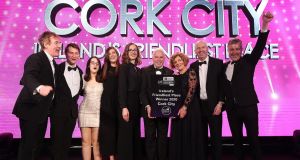 Cork retailers celebrate their win at the Retail Excellence Awards.

The Lord Mayor of Cork, Cllr John Sheehan has paid tribute to the city’s traders for their work in developing a customers charter which has helped the city win the Friendliest Place competition at the Retail Excellence Awards.

Cllr Sheehan said that the honour from Retail Excellence Ireland was well deserved as the city’s traders had worked hard to develop a reputation for assisting customers, both local and visitors alike.

“Here in Cork City, we decided to put the customer at the heart of everything we do and it is amazing to already see such recognition of our combined efforts as Cork is named as Ireland’s Friendliest City,” he said

“We launched the Cork City Customer Service Charter in 2017 and just last week, almost 400 frontline staff from retail and hospitality businesses across the city attended an inspirational customer service training session in the city.”

Local authorities across the country nominated local retail businesses for the Retail Excellence Awards and the businesses were then independently assessed on their friendliness.