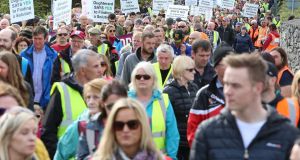 Protest in Oughterard in September against a direct provision centre at the former Connemara Gateway Hotel. Photograph: Joe O’Shaughnessy

Fianna Fáil leader Micheál Martin has said he is “not clear” on what alternatives there are to the direct provision system, adding there is a lot of “wishful thinking” on how to deal with people seeking asylum in Ireland.

Mr Martin said there had been improvements in the system in recent years, but people were still waiting too long for their refugee applications to be heard.

Those applying for refugee status are placed in direct provision, which sees the State provide accommodation on a full-board basis with a weekly allowance, until an assessment of their status is made.

The system was established by the Fianna Fáil-Progressive Democrat government in 2000. Taoiseach Leo Varadkar has said direct provision is “far from ideal” but the “alternative is much worse”. “It’s camps and containers and I hope that never happens,” he said last month.

In an interview with The Irish Times, Mr Martin also questioned if there is a different system available.

“I’m not clear on the alternative,” he said. “I think there’s lots of wishful thinking about . . . that people will automatically provide housing in various areas. I don’t see that.

“Maybe we had alternatives prior to the housing crisis – I’m not sure we had – but the housing crisis has exacerbated this. The problem with direct provision has been the length of time that people are staying in centres. That’s not good. It’s not healthy. It’s wrong.

He said the Government should be “far more upfront” in consulting communities which will house direct provision centres. Recent months have seen protests in Ballinamore, Co Leitrim, and Oughterard, Co Galway.

“There’s no other choice now because everyone’s on alert and unfortunately the wrong message gets out.” The Cork South-Central TD also criticised Minister for Rural Affairs Michael Ring for calling for a “national debate” on asylum seekers and immigration.

Meanwhile, Fianna Fáil has said it does not condone a number of tweets posted by one of its byelection candidates eight years ago.

Senator Lorraine Clifford-Lee, who is standing for the party in the November 29th Dublin Fingal byelection, posted tweets in which she made statements including a comment that her car had been “stolen by some knacker”.

In an October 2011 tweet, she said: “Was on Dublin Bus for the first time in about a year yesterday. Forgotten how much fun it is. Black Brazilian dwarf with ginger hair sat beside me.”

The party said it “does not condone these tweets and believe they were inappropriate”.

“Senator Clifford-Lee has acknowledged her mistakes, has apologised and deeply regrets them,” a spokesman said, adding the party will “continue to support her as she competes for a seat in the Dáil”.