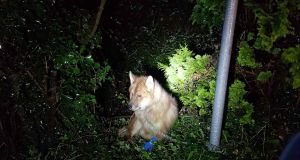 German shepherd-Akita mixed breed, had been left near the entrance to the ISPCA’s national animal centre in Keenagh, Co Longford. Photograph: ISPCA

A young dog was found with severe injuries, abandoned and chained to a gate in Co Longford on Sunday evening.

The dog, a German shepherd-Akita mixed breed, had been left near the entrance to the Irish Society for the Prevention of Cruelty to Animals (ISPCA) national animal centre in Keenagh, Co Longford.

The animal was found at around 8pm on Sunday evening and rushed to a local vet by an ISPCA staff member for emergency treatment. The dog was sedated by the vet and its condition was confirmed as critical.

The animal was scanned to identify the owner but it was not microchipped as is legally required. The ISPCA is now appealing to the public for assistance identifying the dog’s owner.

Chief inspector with the animal welfare organisation Conor Dowling, said the young dog “must have been in excruciating pain” before it was found.

“It is absolutely shocking how anyone could leave an injured dog to suffer in the freezing cold and torrential rain,” he said.

“We would ask anyone with any information on the origin of the dog, how it came to be injured or on who left it tied to a gate to make contact with us as a matter of urgency. Someone must recognise this unfortunate animal,” he said.