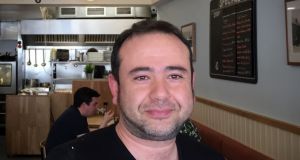 On Monday afternoon, despite the tempting display of pastries piled on the counter, Luigi Massone’s café, Scoff, on Ranelagh’s main street was empty save for two small tables of customers.

Pointing behind him, just hours after new higher parking charges came into force in the Dublin 6 village, Massone said: “Look, the place is empty. It’s lunchtime. They changed a lot of rules. The business of everybody has gone down.”

Parking tariffs rose across the city on Monday. However, Ranelagh and Rathmines are among the districts most affected, seeing a 70 per cent increase in charges from €1.60 to €2.70 per hour.

Sympathising with his customers, Massone says it will be too much for some of them to spend nearly €3 just for a parking space, plus the price of a meal.

Local businesses, angered by earlier changes that saw some parts of Ranelagh affected by parking charges on Sunday, are beginning to take action, meeting recently in the Devlin Hotel.

“We’re very much aware that Ranelagh is a nightmare,” said Hillary O’Reilly, who owns the Hillary Salon. “It’ll deter people from coming. We’ve had plenty of clients who have been towed away, so that deters them from coming [again].”

“[Customers] have always found Ranelagh tricky for parking, and I’m sure the price hike isn’t going to help that,” said Gwen Allman of local bookshop The Company of Books.

Further up the street, florist Dee Curry was parked in a loading bay making one of her many deliveries around the city: “Most of the time, I do be dreading trying to get parking,” she said. “If the loading bay is full, I have to go into somewhere else just to park, and I’d be only 10 or 15 minutes, but it’d cost me nearly €3. The city centre is a no-go area.”

Parking costs and time limits have affected business before. “I’ve had drivers who literally gave up working for me because they couldn’t stick the parking,” she said.

Many locals can get residents’ parking permits, but there are never enough spaces, even now: “It is difficult to get parking on our road and it’s mostly residents having difficulty getting it,” one local complained.

Kilmainham in Dublin 8 is one of the districts added to Dublin City Council’s green zone under the changes that came into force on Monday, with parking charges rising from €1 to €1.60 per hour.

Urging “a bit of a break” for commercial vehicles “who’ve no choice”, Ryan said, “I think they’re going out too far now. I can understand it around Stephen’s Green but, heading out towards the suburbs now, it’s a little bit much.”