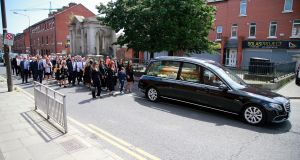 Family and friends following the hearse in the Liberties on their way to the funeral Mass of comedian Brendan Grace. Photograph: Nick Bradshaw/The Irish Times

The first sign the coffin was on its way was the arrival of a large wreath spelling out the word ‘Bottler’, in tribute to one of Brendan Grace’s best known characters. Just before 1pm, there was applause from the street outside St Nicholas of Myra church in Dublin’s Liberties, as the beloved entertainer’s coffin passed the crowds who had been lining Francis Street since early morning to remember a man who, his manager Brian Keane told mourners, remained his “humorous, kind and brave self” right up to the end.

Brendan Grace’s coffin entered the church to the Dublin Forget-me-not choir singing A Dublin Saunter, “and if you’re in a hurry, you’d better leave now because we’re going to take a Dublin saunter through his life,” chief celebrant Father Brian D’Arcy told mourners.

The comedian and entertainer, who died last week at the age of 68 after a short illness, carefully planned every detail of the ceremony, which featured performances by Red Hurley, Paddy Cole, and some of his own recordings, including John Denver’s This Old Guitar.

Thousands of mourners, including well-known figures from entertainment, the arts, media, politics, sport and public life, had been gathering since early in the day. Among the first to arrive were singer Daniel O’Donnell; former taoiseach Bertie Ahern; musician Paddy Cole; singers Tony Kenny, Joe Cuddy and Dickie Rock; and entertainer Adele King.

Moments of sadness and raucous laughter

During a ceremony that blended wit, music, informality, moments of sadness and raucous laughter, Fr Brian D’Arcy said “you went to a show, and you laughed and you cried, and it’s the same today, we’ll grieve and we’ll laugh.”

Grace “didn’t have friends, and he didn’t have fans, his friends and his fans were the same thing”, he said welcoming everyone into the church and the thousands on the street outside.

He introduced three of Grace’s “beloved grandchildren”, James Gillespie, Aidan Bradley Grace, and Patrick Gillespie, who brought symbols of his life to the altar, including a microphone, a guitar, and a book of Brendan’s own jokes, Amusing Grace.

Fr D’Arcy’s homily remembered Grace as “on the stage, or off the stage, a lovely, lovely man; modern, but old style; loyal, but knew his own mind; honourable, but wouldn’t be walked on. He had an inner balance, much of it through Eileen.”

He continued, “Everybody loved Brendan Grace, whether they were Protestant or Catholic; young or old; educated or non-educated. He unified the country and sent them home with a smile on their face,” no matter who they were, he added.

His “humanity, generosity and goodness” would be remembered, along with his ability “to lift the gloom of the nation, no matter how he felt.” His “only vocation in life was to make people happy.”

In his eulogy, Grace’s manager for almost four decades, Brian Keane, recalled moments from an “adventure” that began when he was 16 years old.

“I was fortunate to be able to spend some time with Brendan in his last few weeks and it has to be said he remained his humorous, kind and brave self,” Keane said.

“When he asked me to speak today, I agreed and asked him was there anything else he wanted me to do and he said, ‘oh yes. Set up my merch table at the back of the room. You could shift some of the last DVDs and cut the priest in for 20 per cent’.”

There were emotional scenes and echoes of their father’s sharp wit as eulogies were delivered by each of Brendan Grace’s four children: Amanda Grace, Melanie Gillespie, Bradley Grace and Brendan Patrick Grace.

Bradley spoke fondly of his father’s eccentricities, saying he was “generous, wise, confusing, beautifully strange and hilarious”. He recounted that he was a collector, “not of antiques, but of plastic bags and empty plastic containers”. “It’s a strange thing to be brought to tears now by the sight of an empty I Can’t Believe It’s Not Butter container.”

At the end, “he was at peace, and he gave us peace, eternal peace”, and it was an “honour and a source of tremendous pride to be his son.”

“Being Brendan Grace’s daughter was being enveloped by a massive hug from a mighty protector for 41 years,” she said, through tears.

Brendan said his father was “the kindest, gentlest, most compassionate person I’ve ever known.”

Amanda said her father was “a force of nature” and “non-conformist”.

Her voice broke as she added that “the infinity of space he filled with his thoughtfulness has become profoundly apparent to me in the days since his passing.”

The Dublin Forget-Me-Not choir, a choir that unites older people affected by dementia and memory loss, their carers and family members, also performed during the mass. Grace had been a supporter of the choir, and was due to play a gig with them later in the year at the Olympia.

Grace’s wishes were that his remains would be carried from the church in the heart of the Liberties, to the sound of his own voice singing Dublin In The Rare Auld Times, accompanied by the voices of the hundreds of mourners who turned out to pay tribute to him.

Outside the church, Paddy Cole remembered Grace as a “consummate professional, a great guy to work with and a great guy in the business. He had an aura about him when he walked into the room, people would start to smile before he said a word.”

Daniel O’Donnell said “it’s hard to believe that his voice is silent, but his memory lives.” Grace had been a great friend of his mother’s, he added. “He used to write to her regularly, and today would have been her 100th birthday, so there will be a party in heaven.”

Impresario George Hunter, Grace’s longtime friend who arranged the music for the funeral, said he had seen the comedian a week ago, when he went to visit him, in the company of musicians Red Hurley and Noel V Ginnity. “He introduced Eileen to us as ‘the Widow Grace’, so he was cracking jokes and having the craic til the end. But he also had great faith. He just said to the kids, ‘when youse all come up, I’ll be there, I’ll be ready’. And he was going to meet Eileen again on the moon. When we were leaving, he said, ‘I won’t say I’ll see yez, because I won’t, but I’ll see yez somewhere.’”

The words ‘I’ll see yez somewhere’ were printed under his photo in the mass booklet.

Mourners outside the church shared stories of Grace’s generosity, wit and warmth. Among the first members of the public to arrive were Kathleen and her husband Daniel, who stood outside the church from 9.30am. She remembered his “energy, thoughtfulness and charity work.” Whenever he performed, “he ignited the whole place. There was a warmth, a beauty, a spiritualism in the room.”

Former guard Joe Fanning said he had been a friend of Grace’s for 35 years. “He used to say to me, ‘You were a shade that was never in the shade’. He had time for everybody no matter who you were.”

Breda Molloy knew Grace from the time he was age 6, growing up as his neighbour on nearby Echlin Street. She recalled performances he would throw in the back garden for neighbourhood children from the time he was about 17, using a blanket as the stage curtain. “He was always such a funny kid. He never lost it.”

He used to bring her mother roses at Christmas. He never forgot where he came from, she said.

After the three-hour long funeral concluded, the hearse was led through the gates of the church by a bagpiper playing Molly Malone, as the crowd lining the streets applauded and sang along.