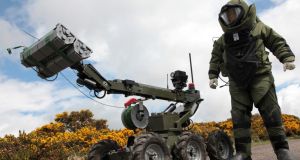 File photograph of a member of the Army bomb-disposal team.

A young man has spoken about the lucky escape he and his family, including his 18-month-old nephew, had when they found an unexploded grenade with the pin removed in the driveway of their family home near Mitchelstown in north Co Cork at the weekend.

Brian Martin found the device at their home at Ballindangan, near Mitchelstown, on Saturday morning as he was putting a child seat into his mother’s car to accommodate his nephew.

Speaking to Mick Mulcahy on the Neil Prendeville Show on Cork’s Red FM, Mr Martin spoke of his shock when he realised what he had picked up was a hand grenade after initially thinking it might be a toy which his nephew had dropped.

“My first reaction was that it was a toy after falling out of the car but, to my horror, it was a lot heavier than a toy and I suddenly realised it was a hand grenade – the pin had been removed but the spring was still in it so it hadn’t gone off,” said Mr Martin.

“I threw it as far as I could into the garden and we called the gardaí – I served in the Reserve Defence Forces and from what I could tell, it looked a pretty modern device. It still all feels a bit surreal to think that I threw a viable hand grenade across our garden.”

Gardaí alerted the explosive ordinance disposal team from Collins Barracks in Cork and a bomb-disposal team using a robot and personnel wearing protective Kevlar suiting made safe the device which they confirmed was a viable explosive device.

Mr Martin said he dreaded to think what would have happened if his young nephew had picked up the device thinking it was a toy.

Gardaí have begun checking CCTV footage from houses in the area to try to identify who was behind the throwing of the grenade at the property.

1 Coronavirus in Ireland: New powers of arrest for gardaí expected to come into force
2 Coronavirus: Death rate from Covid-19 in Ireland rises to 2.4%
3 Coronavirus tales confirm – and shatter – German stereotypes
4 ‘Everyone still thinks it’s a joke’ - parents of toddler with coronavirus speak out
5 Woman in her 50s found dead in house near Killiney Golf Club
Real news has value SUBSCRIBE