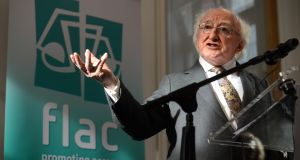 President Michael D Higgins has said it is not acceptable that in a State which claims to be a democracy the “most vulnerable section of our society is unable to access our legal system or is prevented from doing so in a timely matter”.

Mr Higgins said the biggest problem with regards access to justice is the “prohibitive cost” of being involved in legal action and reforms to the legal system must bear that in mind “as much as they can”.

“It is simply not acceptable, in a state that claims to be a democracy that the most vulnerable section of our society is unable to access our legal system or is prevented from doing so in a timely manner,” Mr Higgins said.

“That is a situation which damages the very fabric of our society, entrenching and exacerbating inequality and class. At the very root of democracy lies a respect for all citizens and a refusal to foster a culture of privilege and advantage for those who can afford it.”

He said access to legal aid is a requirement of access to justice and “justice for all must lie at the very heart of any democratic society”.

“There is no doubt whatsoever that those who are most vulnerable and marginalised in society are also those citizens who are most at risk of encountering legal difficulties and most in need of a justice system that is accessible and that operates in the best interests of all,” he said.

“Those who are homeless, the poor, those with a disability or who suffer from mental illness, immigrants, lone parents and those living or growing up in disadvantaged communities encounter many more legal problems than the rest of the population.”

Mr Higgins said it was “worrying” that figures released last year by the Irish Penal Reform Trust showed the majority of those in prisons have never sat a State exam, with more than half having left school before the age of 15.

Mr Higgins also said he often thinks of two children born on the same day, “looking at what different kinds of life they may look forward to”.

“We can be celebrating all the centenaries until the cows come home, but until we have in fact levelled the opportunities of those children, we will not have achieved really the fundamental, basic elements of a Republic,” he said.

Flac was established in 1969 by law students David Byrne, Denis McCullough, Vivian Lavan and Ian Candy, who were looking to use their legal knowledge to provide advice and information to those who could not afford the fees involved.

The new head office, facilitated by the support of Atlantic Philanthropies, is situated on the birthplace of playwright Seán O’Casey.

Shivaun O’Casey, the playwright’s daughter, said: “I think he would be as delighted as I am that this building is being put to such great use.”

Flac chief executive Eilis Barry said that 50 years after the organisation’s establishment “access to justice is still unattainable for some groups and individuals in our society”.

“Without access to justice, laws have little or reduced effect if they cannot be enforced. Legislation such as the important new provisions in the domestic violence act or in relation to the new legislation protecting casual and precarious employment are effective only as far as they are enforceable,” she said.