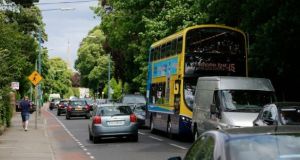 Gardens of properties in Terenure are among those that will be affected by the BusConnects core bus corridor project. Photograph: Nick Bradshaw

One hundred more properties in the greater Dublin area will lose part of their front gardens to clear the way for proposed bus corridors in the capital than was originally anticipated by the National Transport Authority (NTA).

It is understood the NTA has over the past few days issued letters to around 390 property owners along six further proposed bus corridors including Bray, Ballymun, UCD and Ringsend to the city centre, Blackrock to Merrion and Finglas to Phibsborough.

This now brings to 1,400 the number of properties in the greater Dublin area which could lose part of their front gardens to clear the way for the routes.

The majority of latest 390 impacted property owners (160) lie on the Bray to city centre corridor.

The BusConnects project involves upgrading 16 core bus and cycle routes into the city along with a redesign of the network.

The NTA announced last year a total of 1,300 property owners could lose part of their front gardens under the core bus corridor project. However, in recent months there were indications this figure could rise slightly.

The authority is expected to publish details of the final six corridors on Tuesday afternoon. It has offered one-to-one meetings with affected property owners and is organising information and community forums for the final batch of corridors.

The NTA has previously said those affected will lose on average one to two metres of their front garden but that some properties could lose up to four metres. Those affected will receive an average compensation payment of about €25,000.

The BusConnects core bus corridor project is subject to approval from An Bord Pleanála and construction of new lanes would not begin until 2021.